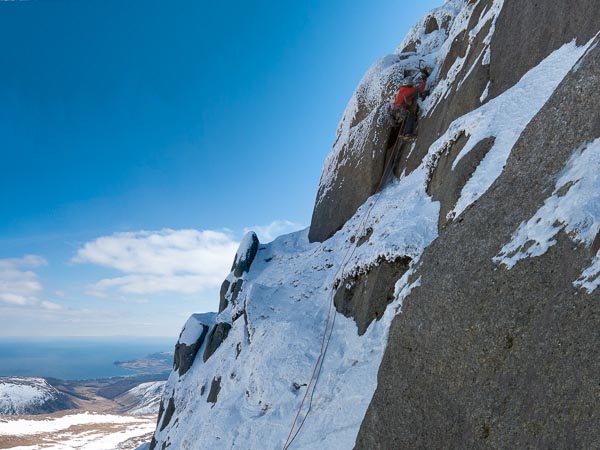 Stuart McFarlane climbing the final chimney on After the Storm (VI,5) on Beinn Nuis. Glen Rosa, Brodick and the Scottish mainland can be seen in the far distance. (Photo Simon Richardson)

Chance is a fine thing. A route on Arran was high on my list of objectives for the winter, but as the season progressed it was becoming an increasingly remote possibility. Then out of the blue Stuart McFarlane emailed me and suggested we visit the island and climb a new route on Beinn Nuis. I jumped at the opportunity, but our first attempt (with Henning Wackerhage) floundered before we even left home with a terrible weather forecast, disrupted ferries and blizzards all over the island. But with disappointment there is often a hidden upside, and in this case the great storm had left the Arran mountains covered deep in snow, and with cold conditions forecast to continue over Easter, the project was back in play.

Unfortunately Henning couldn’t join us second time around, but the logistics worked like clockwork and at 8am on April 1, Stuart and I were gearing up below the impressive North-East Face of Beinn Nuis. The classic Nuis Chimney may be the most popular route on the island (with about half a dozen ascents or so to date), but I was astonished that the impressive face to its right was completely untouched in winter. Standing directly below, it was immediately clear why it had attracted few suitors – the 200m-high wall is defended at its base by boiler-plate slabs, and above, monolithic walls appeared to block all possible lines through the steep central section. And what was in store on the headwall, buried deep in rime from the recent storm, was anybody’s guess.

Looking more closely however, there was a single line of weakness that cut through the steep lower slabs – a ribbon of turf no more than 15cm wide that emerged onto a steep undercut ramp. Where this led to was unclear, but this was the genesis of a line that Stuart had spotted through the mist 17 years before and was the reason why we were now here. As always there was nothing more to do, except start climbing.

Above the ribbon, we followed our noses taking a natural zigzag line between the impenetrable granite walls on patches of well-spaced turf. The climbing looked daunting from below, and was often poorly protected, but no move was particularly difficult and the pitches flowed. We topped out in sunshine just below the summit cairn. Six varied ropelengths lay below us, all set against an incredible backdrop of mountain, glen and sea. Stuart suggested we call the route After the Storm (VI,5) – an appropriate name for a memorable journey up an outstanding face.

We considered other venues for our second day, but we were drawn back to the architectural splendour of Nuis, and added The Nuis’s Tooth (III,4) on the prominent pinnacle to the right of Gully 5. On the ferry that evening we reflected on our trip. I had fulfilled a long-term ambition of winter climbing on Arran, but for Stuart the satisfaction was deeper and more personal. From his hometown of Stevenston, Stuart can now stare with well deserved pride across the water towards Arran and the beguiling cliffs on the North-East Face of Nuis.

1 Response to After the Storm