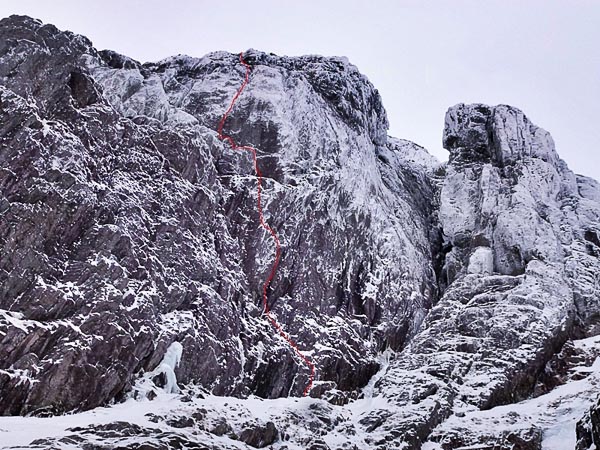 The daunting Slime Wall on Glen Coe’s Buachaille Etive Mor showing the line of Cold Revenge (IX,8). This serious climb, which is based on the summer routes of Bludger’s Revelation and Bloody Crack, is only the second winter route on Slime Wall. (Photo Nick Bullock)

Nick Bullock and Guy Robertson made a significant addition to Buachaille Etive Mor’s Slime Wall on March 27 with the first ascent of Cold Revenge (IX,8).

“We started up the first three pitches of Bludger’s Revelation, then climbed a short corner onto a ramp leading left to Bloody Crack,” Guy told me. “We followed this, and the obvious series of steep grooves above to the top. The route provided six pitches and 200m of climbing in all.

As Nick is getting old (nearly 50) he’s developed a habit of leaving things behind – on this occasion it was his harness, so we made one out of slings and led in blocks. So after he led the entry pitch I led the two main pitches on Bludger’s, the second of which (the Link pitch) was quite serious to start and very precarious. Nick then led the next two pitches, including Bloody Crack. I guess I could have given him a loan of my harness for this, but in my experience those lessons learned the hard way tend to stick for longer. As it turned out he was lucky as it would not have been advisable to fall off the top half of the pitch anyway!”