Spaced Out on The Ben 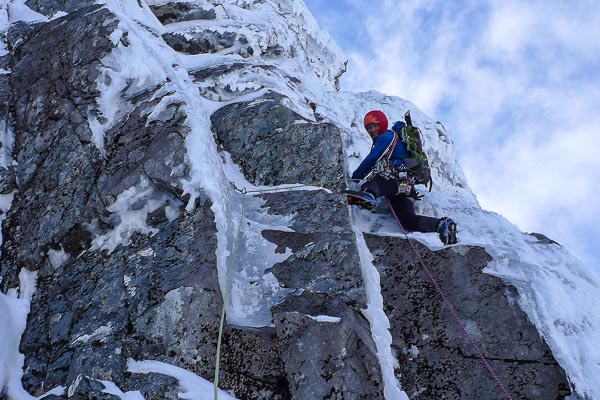 Nick Bullock enjoying the first ascent of Spaced Out (VII,7) on Ben Nevis. Despite the smile, continuous detaching ice made this an exciting ascent. (Photo Iain Small)

Iain Small, Murdo Jamieson and Nick Bullock added a new direct route between Space Invaders and Journey into Space on the Orion headwall on April 6.

“I’d spotted the line when climbing on the Ben with Doug the previous week,” Iain told me. “We soloed up the Directissima start into the Basin. From there an easier pitch led up an obvious V-groove in two steps to a good ledge and belay. We then climbed a steep corner with a stepped arête and a more open groove above that tackles the steepest part of the headwall. There was great climbing on thinly iced slabs with some nasty detached stuff on Nick’s pitch – we almost felt sorry for the folk below in the Basin as great sheets broke away and cascaded downwards from the grinning culprit. Then myself and Murdo realised we were going to have to climb up on what remained of the ice, hoping the belay was more substantial than others had recounted in tales from the headwall. As always, it is difficult to grade these thin ice routes but we were happy with Spaced Out at VII,7.”