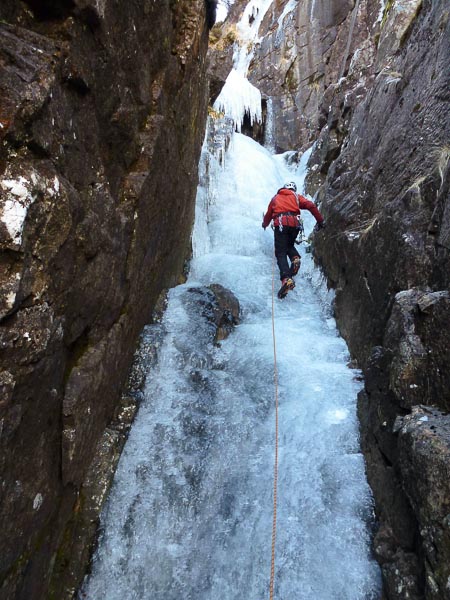 Dave McGimpsey on the first ascent of Allt Coire nan Arr (III) in Applecross. The first ascensionists did not carry ice screws, so they had to lead the route with minimum protection. Even so, Andy Nisbet commented afterwards that it was a ‘relaxing day out.’ (Photo Andy Nisbet)

“I had been out six days in a row, all to the West from home, so I needed somewhere near the road,” explains Andy Nisbet. “Just like the Bealach na Ba, where the road goes almost through the cliffs. Why not a direct finish to an older Grade I on Sgurr a’ Chaorachain unimaginatively called Far North Gully? I printed out an extra large version of the 1:25000 map so I could find it, but of course the weather was perfect and gave a stunning view of Skye and many other islands.

Now I admit my memory was a bit vague but I did remember how rough the descent was, down beside a steep branch of the stream called the Allt Coire nan Arr. The legs were protesting as we zig-zagged between the tiers, and Dave McGimpsey’s legs must also have been unhappy when he pointed out that the stream itself was fully iced and was that not a possibility. But I had this finish in my head and wasn’t going to give up easily. But as we descended further and below the snow level, even I had to reluctantly admit that there wasn’t even a single snowflake down here and no rule book can be bent that much. So we headed towards the stream and looked in to a pleasant surprise. There was continuous ice even on the horizontal sections and the various pitches were complete, even if the flickering light of flowing water could be seen through the ice.

The only snag was that we hadn’t taken any ice screws. We were trying to save our legs by going light and as usual, this suddenly didn’t seem like a good idea. So being my fault, I set off leading the first pitch knowing there wouldn’t be any runners. But actually any angle of ice where you aren’t on your arms feels quite straightforward after several weeks of ice climbing, and the flow of water underneath made the ice very pliable with minimal dinner plating. Dave quickly caught on to this too, so we climbed three long pitches very quickly, leaving Dave with the final wide fall, the one which caught his eye originally. It was quite steep but in steps, so soon we were sitting in the sun having our lunch. “Just like the climbing the ghylls in the Lakes”, said Dave who’d lived there for a few years and only recently escaped back to Scotland.

After a break, we went and looked down our intended line but I couldn’t really see any worthwhile direct finish. It’s funny how memories can play tricks. But then I did remember that Martin Welch often used the top pitch of our stream for ice practice with his clients, and I can remember his lamenting more than once that he’d love to climb the stream below but that it was never frozen. And that was in the mid 90s when winters were really cold. I suspect that there had been too much water and the long dry spell had given us a very lucky break. The Allt Coire nan Arr gave a 200m Grade III on March 30, and as far as I know, Martin Welch never did climb the lower pitches.”