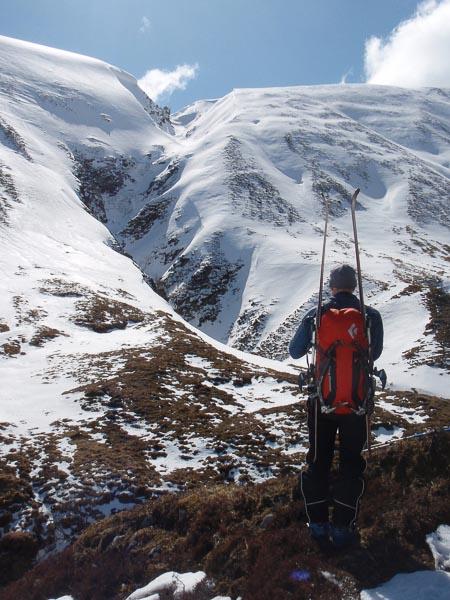 Martin Holland looking up the side stream in the remote Cama’Choire deep in the Central Highlands. The ice pitches of Barrow Boys (III) can be seen in the stream bed and the Left Fork breaking out left. (Photo Jonathan Foden)

Martin Holland and Jonathan Foden made two enterprising exploratory visits to Cama’Choire (between Drumochter and The Gaick) over the Easter holiday period and added three new routes.

“I haven’t heard of any climbing in there before,” Martin told me. “It’s pretty remote and we took the opportunity of the conditions to use skis to access the climbs, walking/skiing about 8 or 9km to get to the routes.

On Easter Sunday (March 31), we decided to avoid the crowds and walked/skied from the A9 just south of Dalwhinnie up the track past the old quartz quarry on Carn na Caim and down to Cama’Choire on the east side of A’Bhuidheanach Bheag. Cama’Choire is more of a steep-sided stream line than a normal coire, and I think it was formed by a glacial lake feature.

Anyway, we skied down the coire to the waterfalls shown on the side stream on the North side at Grid Ref. NN685785. We climbed the gully of the stream line in three waterfall pitches, each containing steepish ice sections, followed by some soloing up easier ground and icy steps above (route description below). Ski Sunday (III) gave some nice climbing on good, if hollow sounding, water ice. Once the angle in the gully eased back we put on skis and skinned up the gully and around to A’Bhuidheanach Bheag before heading back to Pt. 902m. The day finished with a glorious ski down the South side of Coire nan Cisteachan.

The gully of this side stream was generally easy angled Grade I or less snow, but steepened for a section in the middle. We soloed up to the steep section and climbed two lines. The 50m Left Fork sneaking around a crag on good ice and narrowing before popping out on to the open snow slope above and Barrow Boys, the main icefall, which gave a good 50m Grade III pitch on excellent ice in two steps. The main icefall could probably have been climbed at II to the right, but wouldn’t have been as much fun. We then soloed up the easy rest of the gully before cutting out, skinning around to the summit of Carn na Caim and descending Coire Bhathaich and the burn draining Coire Uilleim.

The routes aren’t classics as the climbing isn’t continuous and it’s mostly escapable/bypassable on the gully sides. However, both gullies provided some very pleasant water ice climbing and great scenery in a very quiet location. I’d guess the routes could vary from lots of ice in lean snow conditions to completely banked out in very heavy snow.”