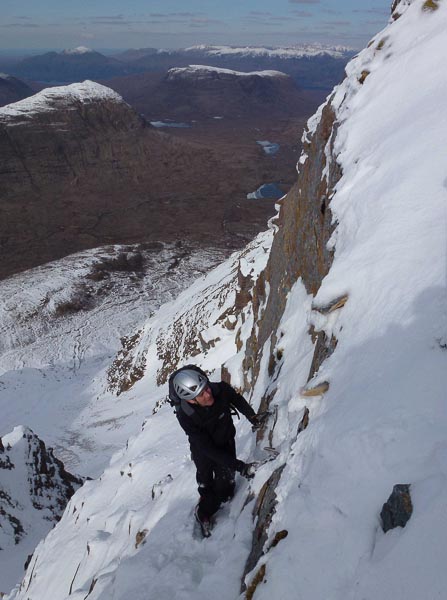 “When Spring is arriving, I can’t help thinking about a fantastic day I had climbing Spring Gully in April 1996,” Andy Nisbet recalls. “The gully is on the north face of Meall Dearg, an outlier of Liathach and I had spotted it thanks to the RAF who flew me over it a few days before. OK, they weren’t just being generous; they were flying out Brian Davison and me after a Jenga incident on Beinn Eighe which cost Brian a broken arm. It was a warm day but the snow was frozen in the shade, so the gully followed by the Northern Pinnacles gave one of the longest Grade II outings in Scotland. When we finished on the summit of Mullach nan Rathain and hit the sun, suddenly there was no snow and we changed into tee-shirts for the walk down. It was the end of a long winter and the mood of total relaxation stays with me still.

So when March 31 was going to be my last day of the winter (I had a hernia operation the next day), and the forecast was sunny, I couldn’t help thinking of Meall Dearg and that there was a gully line right of Spring Gully that would make a fine finale. I wasn’t sure it was going to be a great line, as an easy gully led up to an improbable barrier wall, but Dave McGimpsey was willing to take a chance, plus my ‘black book’ was running rather short on certainties.

The walk-in starts from the Beinn Alligin car park and goes round the back of Liathach, so it was a little worrying that such a low cliff might be bare, but at least it was a gully so the odds were improved. The ground was dry but frozen so the walk-in was so quick that we realised the cliff was in good nick before we really had time to worry. The next question was whether the barrier wall would be exactly that, but initially we found a steep wall at the base to worry us. It puzzled me, as I didn’t remember seeing it on the photos, but there was a steep icefall through it. But when we got to the icefall, a hidden snow gully appeared, almost disappointingly easy as we soloed up towards the barrier wall. It was too nice a day not to be optimistic, and sure enough the barrier was broken by a fine chimney.

We roped up with our 50m of half rope doubled and I set off. The chimney was steep but technical 4 at most and soon I was in the long groove above. Now Liathach sandstone doesn’t have many cracks so we decided Dave would untie from one end and I would lead on it single. That only helps if you intend to stop, so soon I was below a steeper section with still not much rope and nothing I trusted for a belay. Dave said there was 10m of rope left, and it looked about 15m to an easing, but it was one of those days where you had the feeling it would work out in the end, so I went for it. I think Dave had started climbing when I reached a good belay. Dave’s pitch was also very turfy and steeper than we expected but he reached easy ground just as the rope ran out. I expected the ground above just to be turfy slopes but actually the rib right of Spring Gully was well defined and we enjoyed some easy soloing right up to the crest of Meall Dearg.

Up here was very snowy, so the Northern Pinnacles were no pushover. They are very popular and the turf is slowly eroding, but I was still surprised how little was left in the crux chimneys. Some folk recently have said Grade III, and I wouldn’t disagree with them. The summit of Mullach nan Rathain was busy with Liathach traversers and not as warm as I’d hoped, but it was still crampons off and a fine roll back down to the car. Spring Roll was Grade IV,4.”