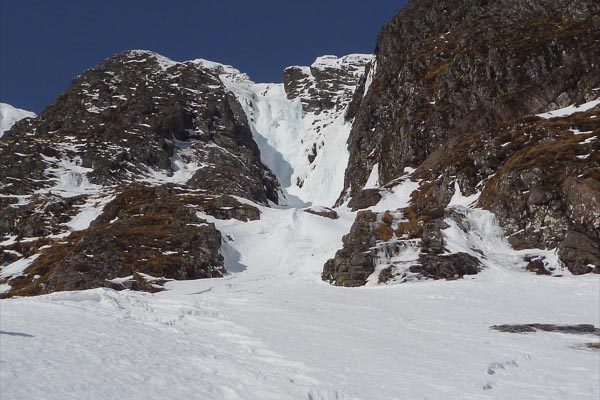 Michael Barnard and Ewan Gourlay visited Creag Meagaidh on March 31 and climbed Centre Post, Right-Hand (V,5), the steep icefall on the right wall of Centre Post. “It makes a good alternative to the Direct, “ Michael explained. “Steep climbing up the 30m-high icefall gains the easy snow slope above, and 60m ropes may just allow the Centre Post belay (ice screws) to be reached. Alternatively good turf protection can be arranged on the left at 45m.”

It seems surprising that such a prominent feature has not been climbed before, but there again ice conditions on Meagaidh have been superb this year. There is certainly no record of an ascent, so please leave a comment if you have been this way before.

Postscript 22 January 2014: Inevitably, Centre Post Right-Hand had been climbed before. Neil Quinn contacted me to say that “Doug Lang and I climbed it about 40 years ago, but didn’t consider it significant enough to record at the time. I am sure it was back in the days of step cutting. Neither Doug nor I kept a record of our climbs, however my best estimate would be late February 1972. I’m fairly sure Doug led it, because I remember being impressed by his lead!”

Michael Barnard was not at all surprised when he head the news. “I might have guessed those two might have done it,” he said. “I’ll have to speak to Neil about it next time I see him. Step cutting as well! I never cease to be amazed by some of the feats of old. Apparently they made a repeat of Hadrian’s Wall Direct this way as well!”