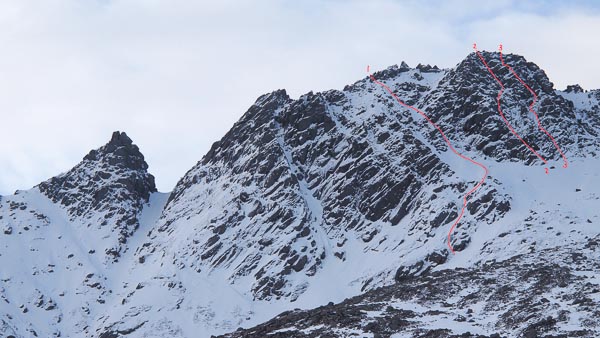 The 250m-high north face of Ceum na Caillich (the Witches Step) above Glen Sannox in Arran showing the new lines added this season. 1. Power Outage (II/III), 2. White Witch (IV,4), 3. Bewitched (IV,4). The only previous winter route on this crag was White Magic Groove (III,4), the wide gully on the left side of the main crag. (Photo Andrew Fraser)

“It was interesting to see you were on Arran on April 1,” Andrew Fraser writes. “At the time I was over on Arran dealing with the power related problems and all the other issues which went along with it. When mains power was reconnected on March 30 things quietened down and I discovered I had a day off, a wife and daughter who had headed off for sun in Malta and a willing accomplice in the shape of Nigel Marshall, Chief Instructor at the Arran Outdoor Centre.

Now Arran’s main problem is that it has few north facing crags and the rest are easily stripped in the sun. The highest north-facing crag is the north face of Ceum na Caillich, which is 250m high and bizarrely only had one existing route – White Magic Groove (III). So we went there and climbed the really pleasant and quite icy line of Power Outage 270m (II/III) up the middle of the face. To the right of this was a high crag with two tantalising groove lines. The left one gave The White Witch 140m (IV,4) to Ian Magill and myself on April 5 and just ahead of the thaw, the right-hand one gave Bewitched 145m (IV,4) to Ian, Nigel and myself on April 11. Both were excellent mixed lines. It is strange that the crag had been overlooked as it is high, north facing, easily accessed from North Glen Sannox, and probably gives the most reliable conditions in Arran.”