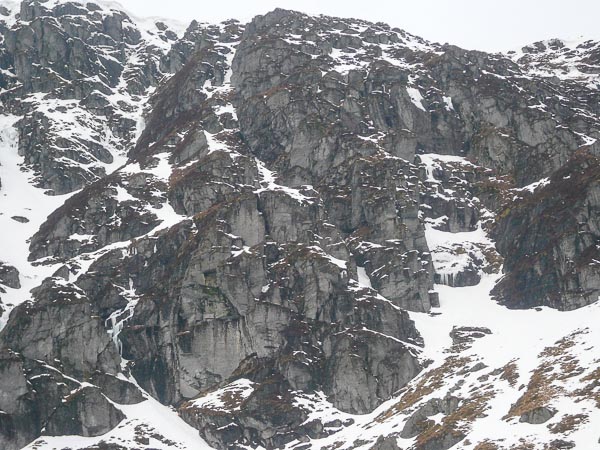 A view of the lower right side of Winter Corrie in Clova, with the prominent line of Grampian Club Buttress (IV,5) cleaving the middle of the lower buttress in the centre of the picture. This photo was taken following a thaw two weeks after the ascent. The icy smears of the Lynx Variation (IV,4) can be seen running down the right wall of the (partially hidden) introductory gully of Wildcat Wall bounding the buttress on the left. (Photo Forrest Templeton)

On March 29, Forrest Templeton and Kevin Murphy visited Glen Clova and climbed the buttress between the initial gully of Wildcat Wall and Pinnacle Gully in Winter Corrie.

“We started at the bottom of the compact area of buttress to the left and below of Pinnacle Gully and followed a groove line to its left,” Forrest told me. “The line went up, veering slightly leftwards until it was possible to flit delicately leftwards across a large detached block onto a horizontal ledge system. This was followed to its left end and then a corner system was taken over a couple of bulges to ledges below a steep head wall immediately right of a narrow chimney. We belayed at the right-hand side of this ledge at some large loose flakes. The first pitch was a full 50 metres. The second pitch constituted the technical crux and climbed the constricting, thrutchy chimney before moving out left below the capping chock stone. This was about 20 metres long, but included having to go back a bit to get a good belay.

We had presumed this line to be unclimbed but an old channel peg was in situ just above the start of the chimney on the left wall. The whole route until that point gave the appearance of not having been climbed before as every crack was vegetated up, muddy and several bits were loose. Whether this peg had been placed in summer or winter, we don’t know, but it was placed next to an excellent wire placement. It could have been used to abseil off or for aid, as the technical crux was just above this. We suspect it was an earlier summer attempt by the Grampian Club.

The line itself was quite a good natural line, with some nice positions. We suggest Grampian Club Buttress as the name. It was probably IV,5. There is no obvious separate continuation line so it is short, but for those who would prefer something more challenging on the way up to do Wildcat Wall, it would be a worthwhile start. We finished up Pinnacle Gully on the day.”

Whilst enquiring about the above ascent with Andy Nisbet, The Lynx Variation (IV,4) to Wildcat Wall by Aberdeen regulars Bill Church, Brian Findlay and Greg Strange came to light. This was climbed on February 24 and takes icy ramps on the right wall of the introductory gully to Wild Cat Wall.