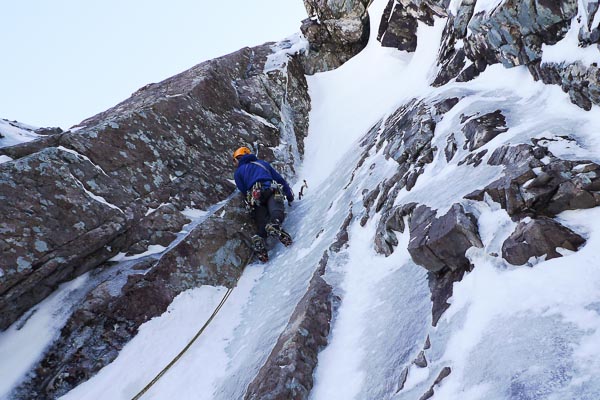 Iain Small and Doug Hawthorn had a superb run of routes on Ben Nevis at the end of March with ascents of Pointless (VII,6), Space Invaders (VI,5), and Journey into Space (VII,5). On March 30 they were joined by Robin Clothier for the second ascent of Urban Spaceman (VII,6), a mythical line that was first climbed by Arthur Paul and a young Doug Hawthorn way back in 1983.

“We climbed the route almost exactly 30 years after the first ascent,” Iain told me, “although Doug couldn’t remember a thing, claiming he was just a young 18-year old at the time. We did an alternate start as the Great Slab Rib was bare, and followed the gully with the cul de sac to the right. This gave a pretty fierce and weird pitch, which involved climbing 80 degree slightly consolidated crusty snow to under a roof with an ominous fang hanging from it. You could only progress up the snow by punching to a full arms length and forming a ‘T’ with arm and axe, hoping the section below wouldn’t collapse when stepping up. I can only guess that the roof above causes the blowing snow to eddy and accumulate under it forming this meringue-like section.

However my luck was in, as there appeared atop the snow, a ledge with enough space to crawl onto behind the fang and under the roof. Lying on my back I could get some gear then extricate myself and tackle the roof, which involved undercutting out to stick the ice on the lip then grabbing the axe with both hands to launch out. The well-bonded thin ice above was a relief. The snow below had supported my weight but, (to put it bluntly), the rest of the team are built more substantially than me, so I found a good belay at the junction with Smith-Holt route. It’s only a variation start, but a burly pitch at tech 8, although not really changing the front-end grade. I quite fancy calling it the Suburban Spaceman start.

The team reassembled and then followed icy grooves for two rope lengths to the steep upper wall and a superb airy stance on an arête. Robin repeated the thin rising line across a slab taken by Shooting Star, and then we followed what we assumed was the ‘ice-choked chimney overlooking the Basin’ mentioned in the route description. We ended in bright sunshine on North-East Buttress after a memorable outing that still left us wondering where the original line actually went, and did it really matter. At least our photos might jog Doug’s memory in another 30 years time!”

Conditions on the harder thin face routes on Ben Nevis were very good in late March. Richard Bentley and Jon MacRobert had an excellent couple of days climbing Point Blank (VII,6) and Galactic Hitchhiker (VI,5). The revered Point Blank almost became a trade route during this period with at least another two repeats!”