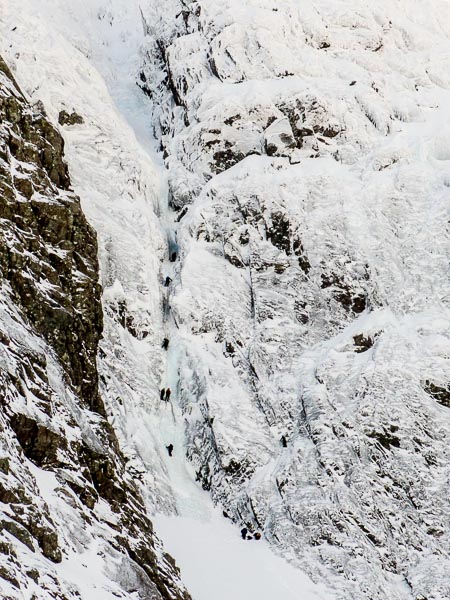 Looking up to Point Five Gully on Ben Nevis, with the sinuous line of Point Blank (VII,6) to the right. Uisdean Hawthorn can be seen leading the first pitch with Robin Clothier and Doug Hawthorn belaying below. (Photo Simon Richardson)

Saturday March 16 was a landmark day on Observatory Buttress with two repeats of the legendary Point Blank (VII,6) and two new routes on the buttress itself.

Point Blank, which takes the steep rib bounding the right side of Point Five Gully and was first climbed by Mal Duff and Rick Nowack in February 1988, has a colourful history. Mal first spotted the line from a picture in Cold Climbs, and attempted the route with Jon Tinker in March 1984. They almost succeeded except for a short section in Point Five Gully that avoided the crux groove. Although it was written up as a route in the SMC Journal, a comment by New Routes Editor Andy Nisbet that the ‘purity of their route had been spoiled by the traverse in and out Point Five’ pricked Duff’s ego, and he was determined to straighten out the line.

Duff and Tinker planned to return to the route in the winters of 1985 and 1986, but conditions were unfavourable. Conditions looked better during the 1987, but Duff injured his knee and was out of action for most of the season. Instead, Tinker conscripted the very strong Aberdeen-based climber Colin MacLean to straighten out the line. The climb was going well, but when MacLean was belayed from the hanging stance at the top of the second pitch, a peg pulled out as Tinker was climbing and they both fell. Fortunately they were held by a protection peg left from the 1984 attempt. The ever-competitive Duff admitted later that he was secretly delighted when he heard the news. Finally, the following season, Duff returned with Nowack and completed the line. Despite numerous attempts, the route went 22 years before it was eventually repeated by Iain Small and Owen Samuels in February 2010.

Robin Clothier had made various determined attempts over the years, so it was fitting that he should make the third ascent with long-term partner Doug Hawthorn and Doug’s son Uidean. The trio were only just in time however, because hot on their heels were Tim Neill and Donald King. Tim said afterwards that the second pitch was a big step up from any Ben experiences he’d had before – quite something for a man who has logged thousands and thousands of metres of high standard ice climbing on the mountain this year.