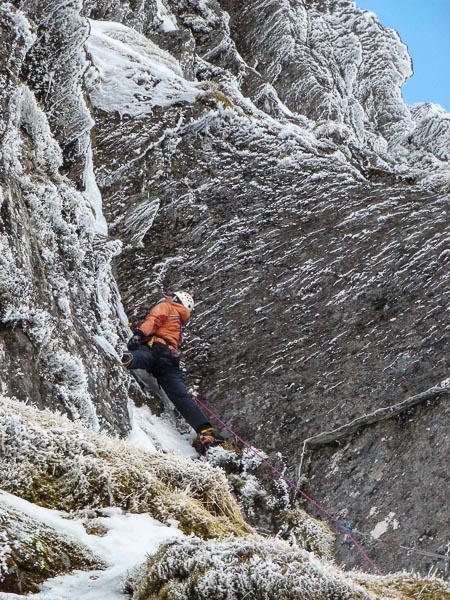 Andy Nisbet has been quietly developing a couple of new winter cliffs this season. Andy wrote to me today with details of the first of these new crags – Stob a’Choire Mheadhoin:

“The first I heard about this cliff was in 1990 when Helen Geddes told me that the late Mike Geddes had climbed a Grade III there. The information disappeared into the back of my mind until in the late 90’s when I was taking the train from Tulloch to Corrour to climb the lonely Munro Beinn na Lap, and looked out across Loch Treig to see the crag. I waited some more until I felt that conditions might make it worth a visit and in mid April 2000 after a good winter, the weather was warming up but it seemed a good option for a last route of the winter, plus I wanted to climb the two Easain Munros.

It was a lovely day, warm and sunny but still frosty in the shade (I hoped). I remember descending from a shoulder near the top of Stob a’Choire Mheadhoin down into the corrie, crossing slushy sunny slopes until below the crag. Many of the walls were bare and there were grooves with forlorn icicles, but the most recessed gully was complete. I was caught out for the first time by the crag being steeper than it looked from below, and set off soloing up the gully. There was good snow-ice, first time placements but just a bit softer than ideal. It didn’t take long before I was committed and above was steeper than I expected. But I’d been climbing for several months so I went up near vertical ice to an easing. Above were tiers of overhangs but broken by grooves, which might just join. I had a half-hearted go but the ice petered out so I retreated to the easing to contemplate whether the long walk justified another go in the assumption that well frozen turf under the snow would allow success, or whether there was another way out of this tricky situation. It didn’t take long to decide to try going leftwards out of the gully system, and I soon met a large flake hidden under the snow, wrapping my arms around it and able to relax for the first time in a while. Traversing on and finishing up an easier rib now felt back in control, if disappointed that I hadn’t climbed the true line. But I bagged the Munros and mentally my winter was over. As I later found out, I had made the correct decision.

Ben Nevis late season was so good the next couple of years that I never made it back, and then snow and ice conditions were never good enough for a number of years. I had looked at the crag again from the train and it persuaded me to make another effort. The weather in early March was great and Aonach Beag West Face had much more ice than I’d ever seen before (I’ve done 10 new ice lines there with Sandy Allan, Dave McGimpsey and Jonathan Preston), and with Jonathan having a couple of days off [March 10-11], it seemed worth a gamble that some icicles on the right wall of the gully might be connected, and that the direct finish was there as a back-up. We took a full rack and two ropes psyched up for something hard, so it was a bit of a surprise to find several iced grooves on a buttress to the right and actually be spoilt for choice. We set off up one, and the ice was so good that we kept on thinking about roping up until we’d carried the full rack and two ropes on out backs to the top (160m Grade III). Actually there were two grooves, then a big gully and three more shorter ones on the next buttress. It was my bright idea to descend the gully and one which turned out to be hard work on rock hard snow-ice, even before we met the steep pitch at the start. It was time to use the rope and abseil down.

This time we left one of the ropes and some of the gear, and actually roped up at the start of the right-hand groove. It was a little harder at IV,4 (just) but this time we didn’t descend the gully. There was only time for one more route so we felt we should try the ‘icicle line’ which I’d spotted before. We started just right of the original gully (named Central Gully in the Ben Nevis guide but actually it’s the leftmost route so that name will have to be changed) and soloed up some fairly easy angled ice to an overlap with icicles. We could have reached the ice over the top but we could also see an inch gap between the ice and the rock, so the fierce pull didn’t seem like a good idea. So we continued up to a cave under the main overhanging band and roped up. There was a ledge squeezed under the overhang and it was just possible to wriggle onto it and crawl along to where the main overhang ended in an iced ramp. Again the ice was rather detached from the rock but at least attached top and bottom. A rather spooky pull on the booming ice gained the main ramp, which fortunately improved with height. Jonathan now had his moment of optimism and headed for an upper iced corner with total confidence. There was an obviously easier ice smear to the left but it looked hollow and unprotected, so he fought his way up the corner placing awkward runners in uncomfortable positions in true Jonathan style. It was definitely the crux and Zee Zee Top became 220m VI,6. We were tired now but in true Aberdonian style, the abseil sling had to be retrieved so we soloed up the big gully for an extra Grade II.

Where to go the next day? There wasn’t really a choice apart from tired legs suggesting some reluctance. Whether we could do the three lines on the shorter buttress and the direct finish to the original route was always doubtful, and the three shorter lines proved enough, and steeper than they looked at IV,4; IV,5 and III,4.

Jonathan was now working but Brian Davison was tempted up from Lancaster by talk of ice. We climbed a couple of routes on Aonach Beag and I just about had enough energy to go back to Stob a’Choire Mheadhoin the next day [March 14]. Brian is the fittest man in the world (but my standards are low) and with a light rack and one rope, we made it to the crag in two hours when the SMC Munro book gives the hill 3hrs 30mins. The slipstream helped me to the base of the “central” gully where this year’s snow had banked out much of the lower ice. This time we roped up for the steeper ice and it was obvious to both of us that in true Patey fashion, the inability to get down had been my original driving force and that technical 5 was probably right. And above was much steeper, so that was Brian’s pitch. I was hiding in a cave and did realise that as Brian moved unusually slowly, with icicles and various other icy lumps whirring past the outside, that it wasn’t easy. “Watch me here” was even more worrying, but at least it meant there were runners (not very many as it turned out). It was an impressive lead up stacked grooves each capped with an overhang. Fortunately each new groove started with neve over the overhang, then gradually deteriorated into crusty stuff below the next overhang. Finally there were a couple of good runners before exiting into the sunshine. We decided on VII,6 so I was pleased I had turned back 12 years previously!”