Night of the White Russians 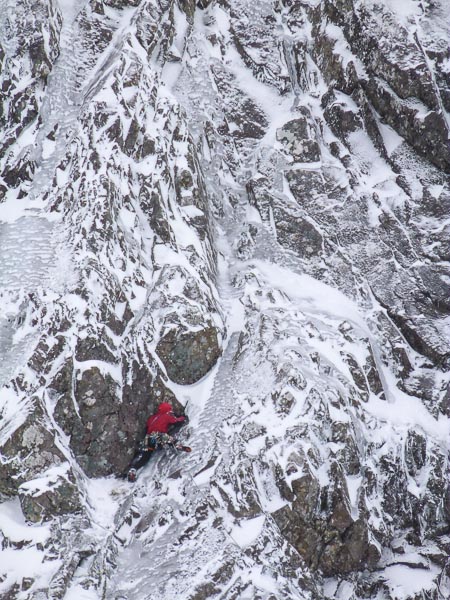 Pete Davies on the superb first pitch of Night of the White Russians (VII,6) on Observatory Buttress. Conditions on the mid-height ice routes on Ben Nevis have been superb for several weeks now, resulting in a steady stream of good new routes. (Photo Pete Davies Collection)

The first of the two new routes on Observatory Buttress climbed on March 16 fell to Pete Davies, Donie O’Sullivan and Tim Marsh when they added Night of the White Russians (VII,6), which starts on the right flank of the buttress about 20m left of North-West Face.

“We climbed two long pitches to reach the Girdle Traverse Ledge,” Pete told me. “The first pitch was brilliant technical icy mixed, and although the second was much easier, it was a natural continuation. We then climbed to the very top of the large snowfield on Observatory Buttress, and continued up the prominent icy corner above that is capped by a prominent square roof. There were some bold moves passing rightwards under the roof to gain an easier chimney leading to the crest of the buttress. Another pitch up the crest, in common with the other routes, then led to the plateau.

In case you’re wondering about the name, it refers to the previous Saturday at the wedding of some fellow Scottish winter devotees when apparently vast quantities were drunk, although know one can really remember!”