The Wolves Are Running 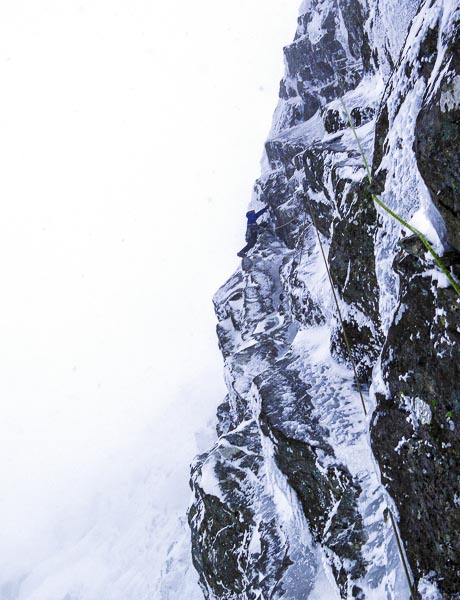 Iain Small climbing through the storm on the crux pitch of The Wolves Are Running (VII,7) on Ben Nevis. This bold icy mixed route takes the vertical headwall between Rubicon Wall and Atlantis. (Photo Simon Richardson)

A direct line up the Observatory Buttress headwall had been on my mind for several years. I’d probed it a couple of times before with Never-Never Land and Atlantis, but it was clear that the true challenge ran straight up the centre of the wall. From afar the headwall looks ominously steep and blank, but I was fairly certain from the earlier forays that there would be a hidden weakness. The only way to find out for sure was to go and have a look.

As usual, Iain Small was not perturbed by a healthy dose of uncertainty, (although he was a little circumspect about the conditions), so we decided to give it a go on Saturday March 16. Whist the mid level ice routes on the Ben were in exceptional shape, and Observatory Buttress itself looked particularly icy, Iain was not sure about the quality of the thinly plated ice. The minor thaw a couple of weeks before had improved the major lines, but it had lifted the more ephemeral ice just a little from the underlying rock.

Iain’s hunch was correct of course, for although the first pitch went smoothly enough on well iced slabs, by the time we reached mid-height the going had become rather tenuous with the thin ice easily shattering and leaving blank Nevis rock underneath. This was just about acceptable when the angle was not too great, but as we belayed under the imposing headwall, it was clear that the climbing was now going to step up a notch.

The crux pitch linked a series of discontinuous grooves, stepping down and left, from corner to corner until a longer groove led up to the final undercut vertical icefall. Iain climbed with absolute precision, and in all my years winter climbing I have never come across anyone else who could have led such a steep, delicate, technical and poorly protected pitch. The ice allowed only a singe hit before it shattered, and sometimes Iain mantled on his lower axe to reach through and avoid the most delicate sections. When he gained the long groove, Iain announced the ice was good, yet when I reached that point I found that the ‘good ice’ was indeed attached to the rock, but it was less than five millimetres thick. The final icefall was also worringly thin, and we reached the Girdle Traverse Ledge in the building storm that swept across the mountain that day, unknowingly bumping into the Point Blank and Night of the White Russians teams.

After a long discussion we graded the climb ‘bold VII,7’ rather than anything harder, because better ice on the headwall may turn it into a less fragile experience. Nevertheless, The Wolves are Running seemed an appropriate name for a particularly frightening route.

3 Responses to The Wolves Are Running