The Wasp on Meagaidh 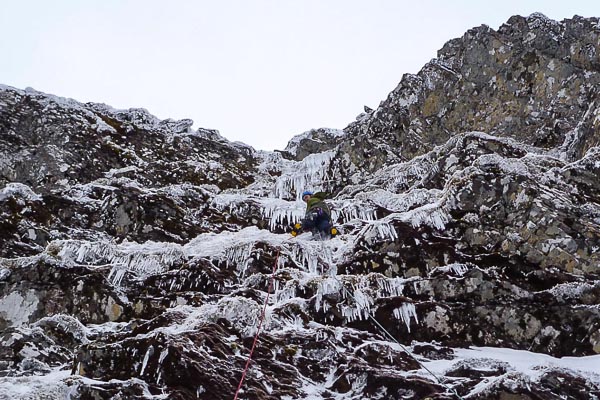 Michael Barnard on the second pitch of The Wasp (VI,5) on Creag Meagaidh during the first ascent. This 130m-long route is a natural continuation to The Blue Icicle, the prominent ice feature that regularly forms near the top of Raeburn’s Gully on Creag Meagaidh. (Photo Neil Redgrave)

Michael Barnard and Neil Redgrave climbed a new line on the left side of Pinnacle Buttress on Creag Meagaidh on Saturday March 16.

“The route starts up the ice pillar of The Blue Icicle and then continues up the wall above via a turfy mixed pitch,” Michael explained. “We called it The Wasp and graded it VI,5.

Neil led the ice pillar (short but steep), and then went up and right to the belay ledge. He shouted down, ‘There’s not much here but once I’m finished it’ll be bomber!’ It was two tied-off screws and a half-buried axe which apparently was better than it looked, but getting a good peg in a crack on the left made me happier about setting off on the next pitch. As expected this was a rather bold affair (four worthwhile runners in 50m) but at least was fairly positive turfy climbing. There were good cracks for the next belay, from where Neil led a nice pitch of snow-ice up to, and through, the cornice.”