Fast and Solo in The Fannaichs 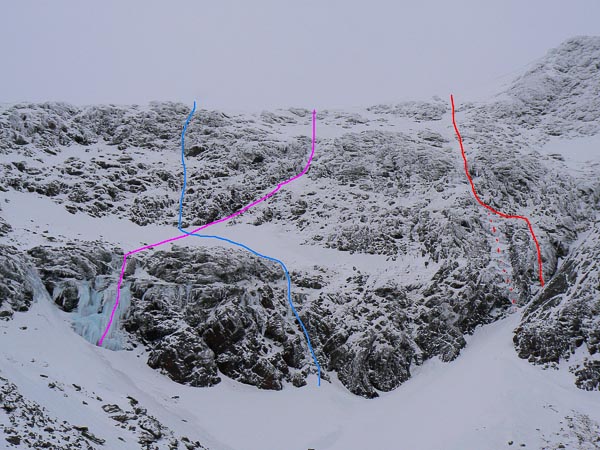 Taking advantage of the recent icy conditions, Martin Hind has added a couple of new routes to Sgurr Mor in the Fannaichs.

“As I don’t like carrying heavy sacks I decided to travel light with no gear on these visits,” Martin explained. “Both trips involved cycling up to the track end above the pipeline and going up to the small dam above Loch Droma. On the first visit [February 24] when I did Blue Sky Thinking, the clag was in and down to the corrie floor, and I assumed the obvious ice line leading up on the left wall of Easter Gully was Gelid Groove. Only later did I find out that Gelid Groove was much further left. There was a good ice pitch to start up which I led up to a steepening. I wasn’t brave enough to solo this, so I came back down and went up an ice channel to the right. Another short pitch led onto snowfields above to the top. Blue Sky Thinking was about III,4.

Now that I knew where Gelid Groove was, it was obvious that there was potential for another line, Happy Ravens [climbed on March 1] had three ice pitches with increasing difficulty. It was most enjoyable and a similar grade to BST at about III,4. The round trip from the road was 4hrs 35mins, so the crag is not as remote as suggested in the guidebook!”

Simon Richardson is a passionate Scottish winter climber
View all posts by Simon Richardson →
This entry was posted in New Routes and tagged Martin Hind, The Fannaichs. Bookmark the permalink.

2 Responses to Fast and Solo in The Fannaichs