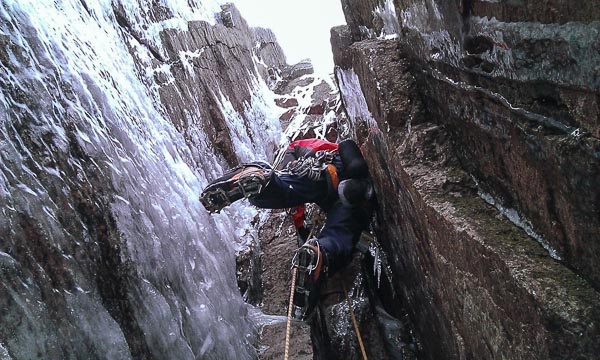 Stuart McFarlane on a rare repeat of Jamie’s Lum (IV,5) on Ben Cruachan. McFarlane continued directly at the top of the pitch resulting in a fine VII,7 Direct Finish. (Photo Andy Clark)

“On Sunday February 24, Andy Clark and I visited Drochaid Ghlas on Ben Cruachan,” Stuart McFarlane reports. “Our original intention was to repeat Tiger, Tiger, thinking the long, cold, dry conditions would allow ice to form in the crux corner. However, it was too sunny and the slabs were bare, so we looked for an alternative to salvage the day.

Jamie’s Lum (IV,5) looked promising, a recessed chimney holding some ice and neve, so Andy lead the first pitch. Pitch 2 had thin ice, hard, grey and well bonded, more akin to that found in the Alps. I climbed up, initially back and foot, until I had to commit onto the left wall. Now high above gear, my concern was for Andy (if I came off), but I soon became absorbed by the thin, enjoyable climbing. I pulled right onto a ledge. Above a steep, turfy wall, a bulging rock groove, with ice on its left hand corner seemed the obvious way to go. There was easier angled ice continuing down the left wall (which we assumed to be the original line), however above still seemed the logical way.

Good runners now placed beneath the bulge and a high tool placement in a shallow crack for my right, allowed me to pull out left and stick the ice. Some more precision placements in this seam of ice, a pull into the groove above, good rock gear and finally the belay! Pumped and relieved, this was awesome! Easier ground in the groove, led above to the top.”