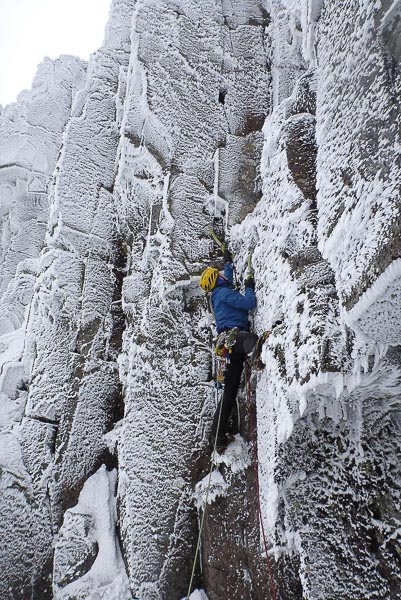 “We went to Stob Coire nan Lochan on Tuesday [March 12] to make the most of the excellent conditions in Glen Coe,” Simon Yearsley reports. “We were delighted to climb a new line on South Buttress. For us this route has a somewhat convoluted history, one reason for its name: Twisted.

In 2011 Malcolm and I climbed Chimney Route with visiting US climber and Scottish winter climbing fan, Pete Takeda. We became intrigued by the two tiered wall to left of Chimney Route and began to wonder whether a route could be forced up this to gain the very prominent unclimbed chimney between Inclination and Moonshadow. But it all looked quite implausible, the lower wall was steep and compact, and the wall above the terrace looked smooth and bulging.

Our first attempt, with Paul Figg, in 2012, ended in the corrie floor when I bent down to pick up a glove and collapsed in screams of agony with a slipped disc. Conditions were great so it was a bitter, twisted and hurting party that crawled back down the road.

In the ‘summer’ of 2012 I went for a run up into the corrie, accompanied by my dog (Bob). This was more useful than might have been predicted given the 5m visibility: I found a crack system running up the right wall of Twisting Gully, for 5m anyway.  Maybe the lower wall could be breached?

We were fairly sure that the bulging wall above the terrace would need ice, and we knew it formed there, so when we saw pictures posted on UKC (thanks ‘peebles boy’) showing Stob Corie to be both icy and rimed we thought we’d give it a go.

We made slow progress up to the corrie. Malcolm has put off a much-needed back operation till the Spring, and is recovering from a badly twisted ankle administered by the Ben.

The route started with a bang – a steep committing swing across the lower wall.  Unexpectedly, the wall then proved more amenable than we’d anticipated; hidden ledges, very turfy for Stob Coire, and good and dramatic with Twisting Gully’s bed dropping away below. The first barrier wall was breached. It was an excited pair, which gathered on the terrace to stare up at the second barrier; we could see ice at the top of the steep wall. But could we reach it?

An unhelpful flaring crack lead up to the ice, with a smooth wall to its left. I spent a long time trying at arrange protection on the wall – a cluster of a couple of poor wires, a tied-off blade peg and a Terrier.   It was time to commit. Tenuous moves up the steep wall, pulling right to gain baggy hooks in the top of the crack, then a satisfying ‘thwump’ as I stuck the ice. Another steep pull… and breathe… and relax! The rest of pitch followed the natural icy drainage line coming down from the upper chimney, with an excellent eyrie stance on the arête below a steepening in the chimney.

The final reason for the route name – during two long doomed attempts at winter alpinism in Canada, we had one particular song on repeat as the snow fell endlessly: ‘Twisted By The Pool’ by Fac 15. Humming this as Malcolm lead the final chimney pitch, we knew the route, and the name, were in the bag.

Topping out with the Aonach Eagach bathed in sunlight, we realised just how lucky we were to have climbed three superb new pitches on such a well-travelled cliff.”