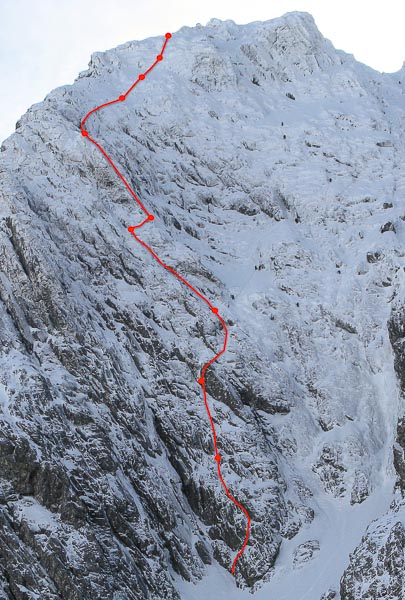 The line of Shooting Star (VI,6) on Ben Nevis. This ten-pitch long expedition, which is one of the longest routes on the Orion Face, links together several existing routes and includes two pitches of new ground. (Photo Simon Richardson)

The second magnificent addition to Ben Nevis fell to Robin Clothier and Richard Bentley who added Shooting Star (VI,6), a superb 500m-long rising line across the Astronomy and Orion faces. The route was climbed on February 23, the day after the first ascent of Deadly Presence.

“I’ve been climbing all over the Orion Face and its headwall for over 30 years,” Robin told me, “but I’ve never seen conditions as good as this before. Our objective was to try and find the longest line up the face, starting at the base of the buttress to the right of Minus One Gully with a finish overlooking Orion Direct at the very top of the mountain.”

“We started up Astronomy,” Richard explained, “and then continued up The Black Hole, Urban Spaceman, Smith-Holt Route, then two pitches of newish stuff to reach a point overlooking the Basin. This section included a super thin traverse with poor gear. We then climbed a chimney left of Epsilon Chimney, continued up Zybernaught, and followed pitch four of Space Invaders to join Journey into Space. A long snow slope then led all the way to the summit cairn of North-East Buttress… phew!”

I spent an evening discussing the climb with Robin in the CIC Hut the following weekend. “Sections of nine routes were used, together with two pitches of new ground,” he said. “The whole route was climbed on thin snow-ice. I’ve never seen it like that on the Ben before, but there was very little protection. We graded VI,6 but make no mistake, it is a very serious route! What really pleased me is that Shooting Star is such a natural line – the route finding was straightforward apart from the traverse section overlooking the Orion Basin to gain the groove-chimney left of Epsilon Chimney.

Both Robin and Richard are Nevis regulars of course, but Robin in particular has been winter climbing on Ben Nevis for nearly four decades. There is no question that the ascent of Shooting Star directly resulted from both his intimate knowledge of Nevis ice routes and a deep understanding of how to interpret climbing conditions on the mountain. I was thrilled when Robin contacted me with news of their success. For me, Shooting Star is one of the true highlights of the 2013 Scottish winter season.

One Response to Shooting Star