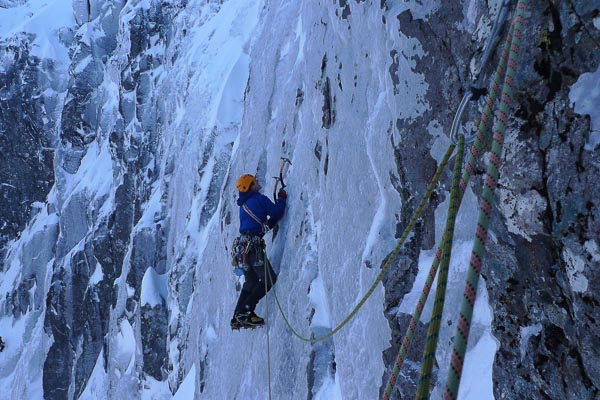 Iain Small on the crux pitch of Deadly Presence (VIII,7) on Ben Nevis. “It was pretty thin ice,” Iain said afterwards. “Gear was difficult, but the ice was mostly well attached, which gave me some confidence to push on up the wall. I reckon it’s a contender for the leanest ice pitch I’ve ever climbed.” (Photo Doug Hawthorn)

There were two truly magnificent routes added to Ben Nevis in February. First off was Iain Small and Doug Hawthorn who climbed the icy wall up and left of the ramp of Left Edge Route on Observatory Buttress on February 22. This route serves as a natural continuation to Appointment with Fear (which joins Left Edge Route for its third pitch), and joins the Direct Finish to Observatory Buttress at the Girdle Traverse ledge.

“I was really doubting whether the route would go when slogging up Observatory Gully,” Iain told me. “Astronomy was another option for the day, but luckily we gave the line a go and I got to do Astronomy with Fyffe junior a few days later! After a bit of anguish I gained the big girdling ledge, and then Doug tackled the next two steep walls directly with another long bold pitch. One crucial runner (of only four) on Doug’s pitch was a stubby screw hammered into an icy crack. Doug reckoned it was worth blowing the £50, but the screw emerged only slightly the worse for wear – maybe a bit like us!