A Day of Adventure 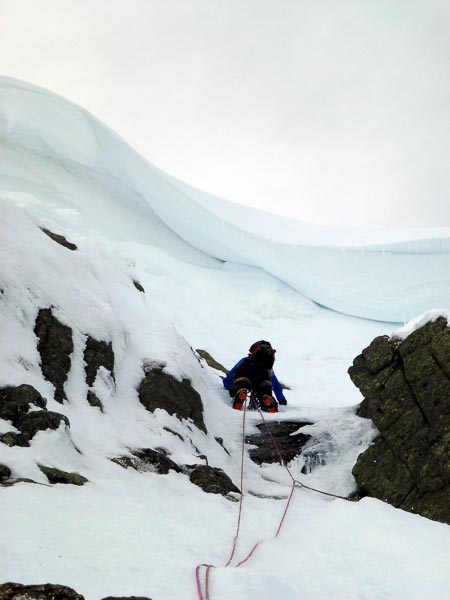 Sandy Allan approaching the large cornice on the first ascent of Adventure (V,5) in Garbh Choire Mor on Braeriach. “It’s not the quality of the climbing that makes the day here – it’s the whole adventure”, said Sandy on the way down. “And we had had an adventurous day,” confirms Andy Nisbet. (Photo Andy Nisbet)

Andy Nisbet, Sandy Allan and Dave McGimpsey added a new route on the far right side of Garbh Choire Mor on Braeriach on March 4. “Braeriach for me is kind of a last resort, when everything else with new routes is bare, but it still needs good weather” explains Andy. “MWIS said winds southerly 15 to 20mph; the Met Office said Sgorr an Lochain Uaine would have southerly 20mph to start, then an unlikely calm by 9am, and later 20mph again, but those forecasts seemed good enough to make the trip. So it was an unpleasant surprise when the wind was at least 20mph even at the car park for the cycle up Gleann Einich and considerably more as Dave, Sandy and I arrived exhausted at the top of the glen. At least it was below freezing.

Despite the temptation not to bother, we did leave the bikes and set off into the wind cloud. The idea was a route on Corrie of the Chokestone Gully so we made the long rising traverse round the hillside in a whiteout. Sandy is good for comments – “We’d be telling clients to get the compass out and count paces, but we’re just blagging it”. He did get the compass out and count paces for a while but then we got distracted but still hit the col spot on. We almost hadn’t noticed that the wind had dropped, so one up for the Met Office. We took our sacks down to the crag and our lack of confidence that we would be returning was justified as our route was looking rather bare (and hard). So we carried on down into the Garbh Choire and headed up for Plan B, a groove line on the right edge of Garbh Choire Mor and left of a route called Jackpot which I’d climbed in January.

The name Jackpot was because of a lucky guess that the cornice would be small. This time Stephen Reid had sent me a lovely picture showing that White Nile was black (three folk in the next three days asked me if White Nile was in), and this just happened to show what I thought was a small cornice above our line (thanks Stephen!). And it was still a bit misty as we approached in blissful ignorance. It did clear as we roped up and the cornice certainly wasn’t small, but not quite the normal house-sized, and we just had enough momentum to start climbing.

The groove looked quite easy from below but was full of soggy moss and detached ice. Fortunately the right wall turned out to be a huge spike, which allowed me to swing up. With a nice sling runner for confidence, the ice disintegrated more slowly than I made progress upwards (just, but tough on the seconds) and I reached a good crack just as the rope ran out. Sandy led on towards the cornice, a curly affair, which seemed to increase in size as the rope ran out and the Sandy figure got smaller. By the time he belayed, he was quite small and it most certainly wasn’t.

There weren’t any volunteers for the next pitch but it had been my idea to come here. So I set off hopefully left over a rib with the idea that the cornice, which was out of sight, couldn’t be any worse than what was above. I admit I was disappointed but at least there seemed to be a chance. The snow started at 70 degrees and over ten metres reared up to vertical before the last two metres were overhanging to a considerable lip. Fortunately the sun hadn’t been on it so the snow was good enough to take your weight. By digging though about a foot I was able to get axe placements, which seemed to hold. By using the one move at a time method (like footballers, one match at a time) I ended up almost able to reach the top and with a lot of effort, chopped away the lip. I did think about digging out a slot but that would have taken at least an hour of effort I didn’t have, compared to a few seconds going for it. With the knowledge that the plateau had perfect neve, it was over in seconds but took another couple of minutes for my heart rate to slow down.

As I dug out a buried axe belay, I realised that the mist had settled down into the valleys and I now had a perfect vista of snow capped peaks rising from a sea of cloud, plus flat calm weather allowing me to chat to the others coming up. It was like a true reward for the effort. Adventure is hard to grade; it could be anything from III to V depending on conditions and more likely impossible with the bigger build-up, so we graded it V,5 on the day.”