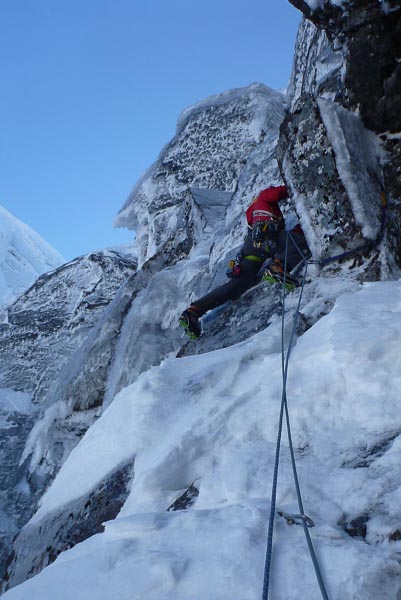 Dave Macleod setting off on the second pitch of Angry Chair, a new VII,8 on the East Flank of Tower Ridge of Ben Nevis. “It was a really good varied route with interesting climbing, a pumpy crux pitch and great situations,” his partner Helen Rennard summarised afterwards. (Photo Helen Rennard)

“We didn’t have a definite plan on Tuesday and took up a large mixed rack and ice screws so we had the option of either ice or mixed,” Helen explained. “Dave had been up on the Sunday and had seen that there were still mixed routes to be done up Observatory Gully, but as a temperature inversion was forecast we thought it might be too warm. We stopped for tea at the Hut and then decided to head up there and have a look anyway. Dave had seen some potential new lines on the wall right of Clefthanger and when we got there it looked to be in good condition.

I led the first pitch, which started up snowy steps and then went left up an open corner and series of steep ramps past a large booming flake at half height and onto snowy slabs above. The snow was cruddy and mostly unhelpful and there was lots of clearing. There was ice in the cracks too. The hooks in the corner crack were good and the flake provided a welcome rest, though I wasn’t entirely convinced how solid it was…

Dave led the second pitch, which was the crux and went up the snow-covered slabs and left into a steep icy corner. He was out of sight once he stepped round into this. There was a good bit of ice on this pitch, though not enough to front point on, which made it difficult. There were good hooks on the right wall near the top of the pitch, then a heave onto the belay ledge.

The third pitch went up past a large block on a ledge then slightly down before traversing across a five metre vertical wall to get to Grade IV ice. The protection at the start of this pitch was two Peckers and, whilst there was a decent handrail for your axes there was nothing much for your feet. I set off to lead this pitch, then promptly passed it over to Dave when I saw the traverse! Once on the ice we continued up this to easy ground, from where we traversed off to the left and into Tower Gully.

We walked back down under the stars with Iain Small, who’d just done Astronomy with Blair Fyffe and Nona Thomas. Then more tea at the Hut, kindly served to us by Rich Bentley. A good day all round!”