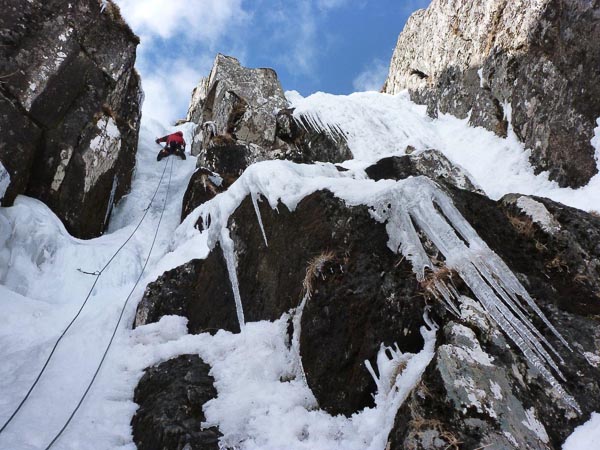 “Despite it being the end of March, the amount of ice on medium level crags was astounding,” John Mackenzie writes. “Neil Wilson, Simon Nadin and I went up Strathfarrar to the relatively remote Sgurr na Lapaich on March 30 via the appropriately named Garbh Choire to the crag of that name which is tucked in below the East Ridge of the mountain.

Knowing (educated guess!) that the other more accessible Strathfarrar crags would be getting rapidly stripped in the warm sun, Creag Garbh Choire seemed a possible choice. Neil and I had been there earlier this winter in poor conditions and done the longest buttress at Grade IV but it is the deep-set gullies that are the attraction here and they sometimes hold continuous ice as they do now. The two lines on the left of the crag are the most attractive, a short looking corner gully and to its right a straight narrow gully. The straight narrow gully I had been up to do a few times and mostly it seemed to consist of thin vertical ice curtains hanging over chockstones thin and fragile looking. Yesterday however the chockstones had vanished and replaced by a run of ice. From below it looked innocuous but I guessed that it was going to be very steep judging from the ‘normal’ appearance.

Neil led up the first section of ice to a cramped belay on the left so pushing me to the front with Simon as cameraman. The next 50m was a bit like a steeper and bolder Two-Step Corner on the Ben with three near vertical sections on ice that varied from bullet hard to perfect to horribly hollow. Unfortunately screws didn’t work well – I only had three anyway – mostly they either entered air gaps or simply refused to penetrate and the rock walls either side were remarkably smooth. A poor upside down Friend in a pocket near the top was probably the best and the pitch reminded me of the fact that falling off was a poor idea anyway! Picks penetrated well on the whole given a thoughtful approach even if crampons sometimes skidded a bit. Good belays above helped sooth the mind, as did the nice easy exit pitch too. Only 100m in length but full of ‘character-building’ stuff, (as if we needed it) and hard to grade but technical 5 and Grade V overall though graded for more lenient conditions when more gear should be possible.

An easy descent left time for the next route, the ‘short-looking’ corner to the left. ‘Let’s just solo up to the tree on the left and start from there.’ Not me, who said that incidently! So with Neil over the overhanging bulge, me directly below it and Simon wisely lower down but Neil with the rope fortunately, the true angle of the ‘doddle up to the tree’ became apparent, as did the rest of the now much longer-looking narrow gully above. Safely belayed but not to the tree (out of reach!) we somehow assembled and with Simon in front, spent the next while dodging the ice lumps that were directed down on to us with military precision. He did get somewhat better screws in this time, as the angle was somewhat less than the previous route until the top. A tied off peg and not hugely convincing small nut led to a shield of rippled near vertical bullet-like ice with Simon belayed well off to the right where a swing for us seconds would have been painful. Another good route but with lesser concentration of difficulties and even some gear so Grade IV,5 seemed logical as well as being about 75m in length.

The Glen was magnificent, bright sun, deer all over the place, pines artistically arranged and the snow capped peaks contrasting with the spring green of the Glen and best of all, no-one around save a solitary pair of footsteps that we assumed belonged to a ‘bagger’. . .”