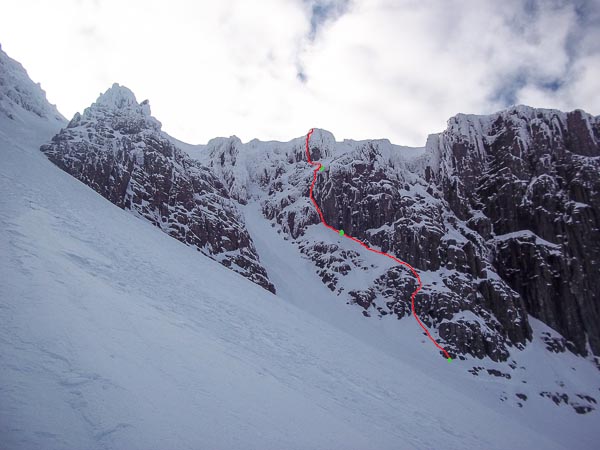 Harry Holmes and Alex McMillan visited Stob Coire nan Lochan in Glen Coe on March 30 with the intention of making the second ascent of the recent Bass-Yearsley addition – Twisted. Unfortunately the route had been stripped of snow in its lower parts, and with other steep routes bare, they decided to seek out some easier new ground. The result was Seattle Grooves (IV,5), a good but escapable new line, on the buttress to the left of Twisting Gully.

“The final pitch was the reason why I had chosen this line,” Harry wrote later on his blog. “I could see some very white looking rocks from the coire floor which didn’t seem to have any routes up them. I took the left-hand groove on this. The groove started off nicely with some good ice in the back but got increasingly steeper with less foot placements until a steep pull over a bulge brought me onto an icy ramp. I climbed this to its top and made my way carefully through the final couple of metres to a small cornice. I broke my way through that and topped out into amazing sunshine.”