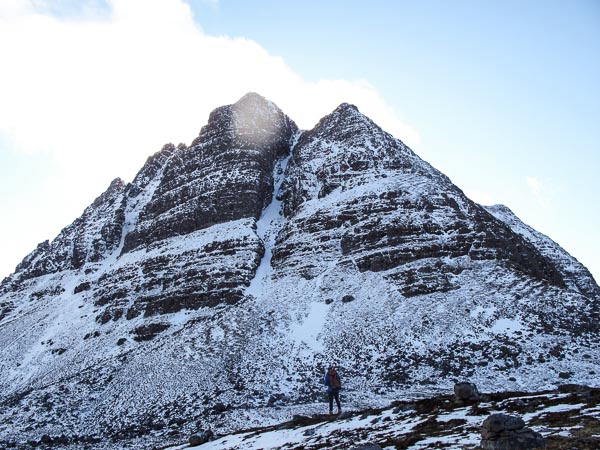 Roger Webb approaching the imposing Atlantic Wall on Slioch. Over the last 20 years Webb has authored over a dozen new routes on this remote face. With a total height of over 400m it is one of the biggest cliffs in Scotland. (Photo Pete Macpherson)

“Roger and I had a memorable day on Slioch’s impressive Atlantic Wall on Good Friday,” Pete told me. “Last time I climbed with Roger was about six years ago when we had a massive day in Beinn Dearg Mor so it was good to get back out with the ‘North-West Connoisseur’ himself. We left the car at 5.30am in daylight and made the longish approach along the shores of Loch Maree then up to the crag.

I can’t believe I have never been to this crag before – it’s a cracker! There are 250m of steep sandstone broken by three or four terraces topped by a further 200m of Grade II scrambling which takes you to the very summit of the mountain.

We decided to do a line up the right side of the crag starting up an obvious corner-line followed by chimneys and walls totally direct all the way to the summit. The first two pitches proved to be the crux with strenuous, and at times quite bold, climbing with bomber turf just when you needed it. The climbing eased afterwards but stayed interesting all the way up the remaining four pitches.

On the top half of the route we had the sun on our backs, which was bliss, and we topped out to one of the most beautiful sunsets I’ve ever seen over Loch Maree and the Fisherfield Forest hills. Overall, it was a very relaxing day and a great laugh with Mr Webb. We called the route ‘Yggdrasil’ which is a sacred tree from Norse mythology and gave it VIII,8, although I find sandstone quite hard to grade. But more importantly, I can’t emphasis enough, how cool this crag is!”

Despite Pete’s casual description, the long approach and descent makes any route on Slioch a major undertaking. Nevertheless, Roger has had a good late season spell on the mountain. A couple of weeks earlier (March 16), he visited the cliff with Guy Robertson and made the first ascent of Morgane (VII,8) the prominent corner-line on the left side of the wall, which joins the upper section of Katabasis.