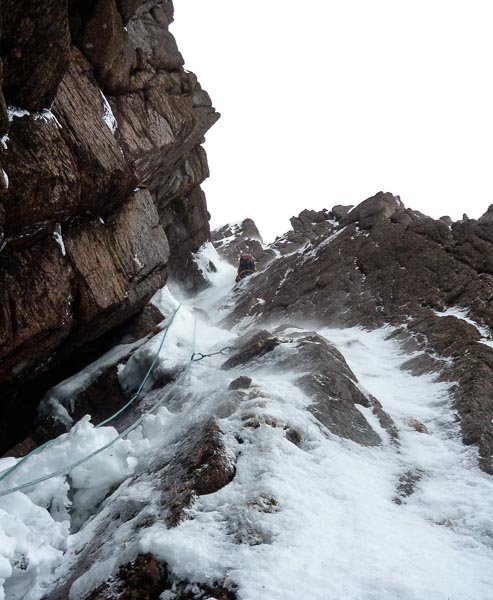 Andy Nisbet on the first ascent of Scarebear (VI,5) on Stacan Dubha in the Loch Avon Basin. This prominent line on the left side of the crag was one of the last unclimbed gullies in the Cairngorms. (Photo Heike Puchan)

“Looking across to Stacan Dubha from Stac an Fharaidh a few days ago,” Andy Nisbet writes, “I couldn’t help noticing this snowy gully. I thought I knew the crag well and that all the main lines had been done, but here was an apparently easy gully. Heike Puchan was after a climbing partner for Sunday (January 12) so I was trying to think of somewhere suitable. ‘The gully might be a bit easy, but it’s a nice remote place and conditions are good,’ I said.

That meant Saturday resting, so I tried hard to imagine how windy it was on Saturday and that the forecast for Sunday was better. But as we battled in to Sneachda against a gale and spindrift, I wasn’t convinced and had to tell myself and Heike that a southerly wind was a bad direction for Sneachda and that it would be better on as soon as we reached the plateau. It did at least improve when we descended out of Coire Domhain but even at Loch Avon it wasn’t calm. Walking conditions were great though.

The lower slopes were banked out so we soloed up to the base of the gully. Well, it clearly wasn’t Grade II as I had thought, and in fact there was considerable doubt as to whether it would go at all. That did at least explain why I hadn’t noticed it. I’m sure I had, but without ice it probably looked impossible so the memory was deleted. I started by convincing myself that the ice might be good and that you could always abb off. I soon found that the ice on the slabby walls wasn’t good, in fact you hit rock with every blow and the only technique was to pull the axe down until it jammed on something, then keep pulling down and never out, then step up and hope nothing slipped. The good point is that I could see an unexpected crack above and the second good point was that as soon as the angle eased, even if it was only a hold, then the ice was hugely better.

After an easy bit there was a longer slabby section, and the thinnest ice coming round the side of an overhang. I couldn’t get the axe to jam on anything and it was looking hopeless, but then I spotted that the angle had eased up on the right. If I climbed up under the overhang and reached a long way right, there might just be something. It was a bit committing leaning so far but at least the axe held on something, now would the feet hold on very little. Obviously they did and really there was only one precarious move followed by a lot of holding your nerve.

Another easy section led to a final groove and bulge of crusty snow. It wasn’t obviously possible and the last gear was at least 10m down. Whether I was going up or down, I had to find something. Despite digging, the only thing I could find was a frozen block out on the left wall, and that was some 2 metres away. The moves to reach it were thin, but at least it wasn’t further up. It took a cam, at least something, and then I could reach some turf above it, and placed a warthog, which you could pull out with your hand. But I discovered you could move up on the turf and step back into the groove. I dug away a foot of snow (ominously easily) down to the back of the groove and it was smooth. I was getting a bit desperate but the top was only a move away; a bit of commitment was required. Moving up on a tiny foothold, I found my leg wedged behind the crusty snow in the cleared groove. This was just enough to keep me in balance to reach up for the top, and even though I was an inch short, a hopeful udge gained better placements and it was all over.

Of course I ran out of rope, but that was less stressful than the climbing, and Heike had the faith to move up a few feet quickly until I reached a belay. There was even less ice for seconding, and certainly the groove collapsed as Heike pulled over. The final pitch was easier to finish on a windless plateau where we could sit for something to eat, except I couldn’t really swallow anything. With the nearby route being Goldilocks, the name Scarebear seemed appropriate. As for the grade, it could be anything from IV to impossible. So we settled for what it probably was on the day, VI,5.

Update – January 14: Masa Sakano is a Japanese astronomer living in Laggan. Which is a clever move, as jobs in his field are limited there, and he has plenty of time to climb. So I persuaded him to go to Stacan Dubha for an iced groove left of Scarebear. It looked totally smooth in a summer picture so the rack was cut down, and the rack proved of limited use in the end. An independent approach to Scarebear was made and the groove looked well iced, just a pity that it was extensive rather than deep ice. After a hopeful ice screw in crust at the start, the rest was just searching around for placements that hit the rock and stuck rather than just hitting the rock and bouncing. Some 40m further on, the rope ran out but I was in an easier angled upper groove by then, and tied on to a hook, two tied- off ice screws in crust, both my axes and as big a stance as I could make (plus a waist belay); a real Ben Nevis belay in fact. Masa climbed very carefully, then led on very carefully to the top. Googling for scary names suggested the spear-wielding Slogra (V,4).