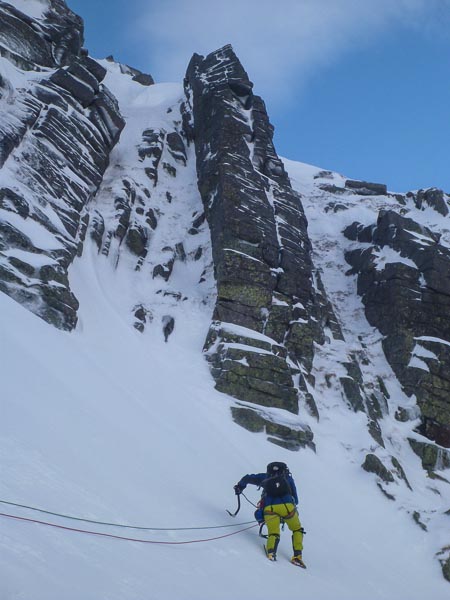 Gary Kinsey making a beeline for the prominent pillar taken by the line of Once We Were Alpinists (III,6), on Creagan Cha-no on Cairn Gorm. “It’s the best line I have climbed so far at Cha-no,” James Edwards commented afterwards. “On the main pitch every move was interesting, and the protection is excellent.” (Photo James Edwards)

18 February 2013: First ascent Max Encouragement (VI,7) on Arch Wall by Masa Sakano and Luke Abbott. This steep pitch climbs the parallel cracks just right of the second pitch of Daylight Robbery on the Arch Wall headwall. Masa originally graded the route V,6, but the pitch looks as hard as the next door Smooth as Silk (VII,7), so eventually Masa agreed to the upgrade!

2 January 2014: First ascent of Once We Were Alpinists (III,6) by Gary Kinsey, James Edwards and Roger Webb. This takes the prominent rib about 50m up and right from Arch Wall. “The main pitch was 40m with another 20m of easy ground to the summit plateau,” James reports. “At one point, just before the end of the difficulties, I was completely flummoxed as to how to sink my tools into the great big sods of turf just out of reach, and Gary’s advice to ‘just pull and step up lad’ left me feeling quite short. Then I spied a tiny seam just on the arête. I just got the tip of my pick in it and stepped up with a wobble (and a tiny squeak). When Roger reached the same point, I kept quiet (of course) about the hidden seam, but noted with disappointment that his wobble and squeak was far smaller than mine!”