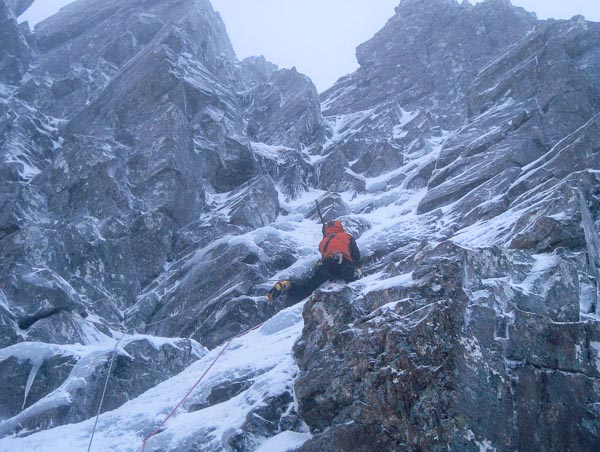 Simon Yearsley making the first ascent of Gallifrey Groove (IV,5) on Ben Nevis. After last week’s generally settled weather, a series of occluded fronts over the weekend made predicting climbing conditions difficult. As a result, this is one of the few new routes climbed in recent days. (Photo Malcolm Bass)

“It’s proving tricky to make the best of the fluctuating conditions this winter,” Simon Yearsley writes. “This weekend was no exception. The forecasts changed daily as a variety of fronts pushed through at seemingly random speeds. So, as Malcolm [Bass] has to make the long drive up from North Yorkshire to get his winter hits, we decided to go high and climb on the Ben with the hope that we’d at least have a good choice of different altitudes and aspects to choose from. Even as the weekend approached, our plans had to adapt to the shifting forecasts. Friday and Saturday deteriorated before our very eyes, and by the time we got to Saturday evening, Sunday wasn’t looking too great, and we were distinctly running out of weekend. Fortunately, Malcolm had Monday off work, so decided to walk up to the CIC hut on the Sunday, and climb in the short weather window on Monday, January 21.

The mid morning walk up to the Ben was a very sociable affair as we chatted to a stream of friends, the majority of whom were making their way down because of unstable snow conditions high up. We spent the afternoon and early evening pottering around various mid-height areas of the Ben. Snow conditions were not ideal, and things definitely not freezing at 1000m, despite the forecast 700m freezing level in the afternoon. However, we did see that the central groove line on North Trident Buttress was looking nice and icy, and if the promised freeze came in later that evening and overnight, it looked like a worthwhile short new line. Malcolm and I had spotted this feature several years ago (it’s even drawn as a feature on the line drawing in the guidebook), and when Helen Rennard and I had climbed the next-door ramp-line of Day of The Doctor in November, I’d confirmed it was a nice-looking line.

We left the hut pretty early on the Monday morning, with everything nicely frozen. The climbing was very pleasant up the open icy groove, which gave several steep steps and a quite tricky leftwards traverse back into the upper groove. The top pitch was well positioned with a short V-groove on the left providing more entertainment. The route was only 60m long to where it joins the horizontal ridge crest of that part of the buttress, but given the fact that Malcolm had to be home that evening, and that the weather had decided to change (again!) and it was now raining (!!) we agreed to finish the route there. We also took the decision to establish an abseil point on the horizontal ridge. With a sling and crab in place, this route and Day of The Doctor provide useful mid-height objectives that can easily both be done one after the other, with the option of an abseil descent if you don’t fancy continuing to the plateau.

The name was pretty easy… something to illiterate with ‘groove’ and to have a connection to Doctor Who. It had to be ‘Gallifrey Groove’.