One More Damp Day in the West 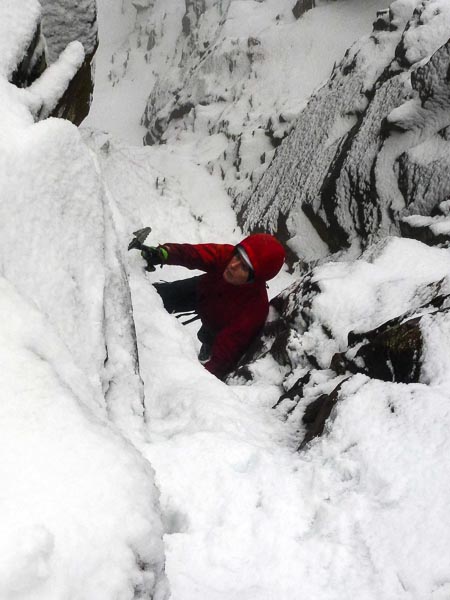 Dave McGimpsey on the first ascent of Strike 3 (III) in Coire na Caime on Liathach. This was the last unclimbed gully on No.2 Buttress in the corrie. (Photo Andy Nisbet)

“So said Dave McGimpsey when we got back to the car,” Andy Nisbet recounts. “Which seemed a bit mean; better than being pulverised by gales and spindrift in the East, I thought. Thanks should first go to James Roddie for blogging pictures of Coire na Caime (Liathach), showing the best conditions since 1994. Although it has to be said this was only in the high east corner of the corrie and much of the rest was bare except for the easy gullies. I immediately picked out an icefall on the buttress between Gullies 2 and 3, and not one I remembered seeing before. This corner of the corrie, lying under the summit of the mountain, is rarely visited, largely I think because it’s the hardest to reach, and clean slabby rock is not much of a temptation either. The weather has been unusual this year with snow in Torridon on a south-easterly wind when normally that direction would be dry; so it had drifted on to that face.

Dave, Sandy Allan and I set off on Monday (January 20) to climb the icefall, although not having been to the corrie for some ten years, I forgot that the traditional approach up Coire Dubh is not the best. After three hours, I had remembered many times! But now we were there, and the icefall was looking good, if a bit wet and thin in the middle section; the freezing level was 200m higher than the monk had predicted. But the ice was soft, never brittle and actually continuous over three long pitches. The thin section seemed to justify a grade of V,4 given that the ice would rarely be thicker and the belay wasn’t the best. And being No.2 Buttress, the name of Two Faced seemed to fit.

Conditions were so good on the buttress that, even though time was getting on, we felt we should try a gully line to the right. And it went well, again continuous snow and ice, and quite steep for a couple of steps (Strike 2; III,4). If the approach was long, so was the descent over the summit and we reached the car well after dark.

With more routes to do, it was a case of keeping very quiet. Which is quite difficult when folk ask you for recommendations for venues in this unpredictable season. But you know that information nowadays spreads so fast. After an essential rest day, the forecast wasn’t great for Wednesday (January 22) but we knew from last time that gales in the Cairngorms and heavy rain in Lochaber meant that it might be fine in Torridon (given a southerly wind). Sandy was busy, so Dave and I returned to Coire na Caime, this time approaching over the top. We were in good form when we stood under No.1 Buttress, which has one ice route from 1994 on its right side. I had always been put off a return by slabby rock, but this time it was white of unknown quality. With no runners on Two Faced and little prospect of any on a route up the centre of this buttress, we had gone light with a 60m half rope and a small rack.

It soon turned out that the white stuff on ledges and any grooves was in fact neve, and there was a continuous line of snow and ice leading up to a smooth barrier wall. The rope did run out, but a brief moving together gained a prefect belay of two large nuts. The barrier wall had to be passed by a line of ice on the right, leading to a second and bigger barrier wall. The existing route was moving towards us at this point, so we agreed to try a line up steeper white grooves near the left arete of the face. Dave headed along a ledge and was soon delighted that the smooth grooves were filled with neve and not powder. Another long pitch gained easy ground. First Foot was quite hard to grade; it felt a bit like a Ben Nevis open face (although not so steep) and we decided on IV,4. You could have argued for IV,3 or V,4 also.

After 230m of climbing, time was again getting on, but the last gully line on No. 2 Buttress was too hard to resist. We decided just to dump the gear and solo it. Again the ice was good and we knew it was less steep than the others, so we climbed it without any heart fluttering and actually made it back to the car without torches. The gully is joined at the very top by the easier option of No.3 (Pinnacle) Gully, so the name of Strike 3 does at least for now (Grade III). I should say before anyone rushes up there, that Coire Dubh Beag was pretty black, and even Coire Dubh Mor was poor with Poachers Fall probably not quite doable. And the steeper icefalls on Am Fasarinen were also too thin.”