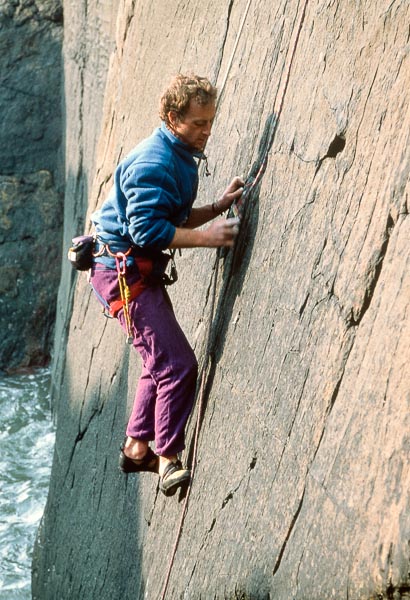 Robin McAllister on the first ascent of The Water Margin (E2) on Portobello. Robin made a significant contribution to Scottish climbing during the 1990s, and is best remembered for his challenging additions to the Southern Highlands, his series of difficult winter repeats and for developing the Galloway sea cliffs. (Photo Andrew Fraser)

A few days ago, the terrible news broke that Robin McAllister had died at the young age of 47. Robin was based in Ayrshire and was one of the driving forces in Scottish winter climbing during the 1990s. He spectacularly emerged on the scene in January 1995 when he made the first winter ascent of Direct Direct on The Cobbler with Dave McGimpsey. The winter ascent of this fierce summer HVS took Southern Highlands climbing up a full notch and has seen very few repeats. Originally graded VI,8, it was repeated by Dave MacLeod six years afterwards, and was later upgraded to VII,9 in the guidebook. It is still considered to be one of the most challenging winter outings on the mountain.

That winter, the McAllister-McGimpsey team also made the second ascent of Rab Anderson’s excellent, but intimidating, Deadman’s Groove (VII,7) on the Cobbler’s South Peak. This set a theme for Robin’s climbing. Over the next three seasons he made second ascents of The Screaming (VIII,8) on Beinn an Dothaidh, Inclination (VII,8) on Stob Coire nan Lochan, Vertigo Wall (VII,7 – second free ascent) on Creag an Dubh Loch, Prore (VIII,8) in Coire an Lochain and The Cardinal (VIII,8) on Beinn a’Bhuird.

“By today’s standards these routes might not seem particularly impressive,” Dave McGimpsey recalls. “But gear has improved so much since then, and Robin was one of very few climbers in Scotland at the time actually trying to repeat these routes. If he’d maintained his momentum I think he would have progressed on to repeating the big VIIIs in places like the Shelter Stone and Creag an Dubh Loch – he was certainly strong and bold enough. High magazine published a list of all the Grade VIIIs at the time, which Robin obsessed over for a good while, but sadly he suddenly stopped climbing and it was never to be.”

Robin also left his mark with dozens of new winter routes across the Highlands, but it was in the Southern Highlands that he scored his greatest successes. He was most proud of the first ascents of Interstellar Overdraft (V/VI) on Merrick with Stuart Mearns, and Resolution (VI,7), which follows a peerless line taking the full challenge of the great central wall on The Brack, with Dave McGimpsey and Andrew Fraser.

In summer, Robin climbed many of the big routes across Scotland up to about E5, but it was in Galloway where he left his mark. “This was not just in terms of his 150 or so new routes,” Andrew Fraser remembers, “but in being the driving force behind almost all of the hard routes and development of the Rhinns peninsula. Routes which spring to mind are Behind the Mask (E1) on Mullwharchar, Spectacular Bid (E6) on Meikle Ross, Edge of the Abyss (E4) on Finnarts Point, Sweaty Trembler (E5) at Portobello, Zero Tolerance ( E5) at Laggantalluch Head, and the development of the Kiln o’ the Fuffock and Crammag Head. In fact, almost every single hard route in the South-West is a McAllister creation. Elsewhere, The Blundecral, True Finish (E5) and Gulliver’s Travels (E2) on the Meadow Face on Arran, and Tales of the Old Days (E5) on Creag Ghlas were Robin routes. All these climbs were done in a ten-year climbing span from 1990 to 2000.”

Scott Muir recalls that Robin took him up his first ever winter climb – North Wall Groove on the Cobbler with Dave McGimpsey – when Scott was fifteen years old. “It was his drive and enthusiasm for new routing, and climbing with him on the sea cliffs of Stranraer and around Ayrshire and the Southern Highlands, that set me on course for a life of climbing and exploration. He was a massive inspiration, role model and mentor – his passion for climbing and the mountains was infectious.”

Although Robin or I never climbed together, I came to know Robin quite well. It seems strange to say it now, but the 1990s was a pre-Internet age, and climbing information was shared by word of mouth, journals and magazines. I often had long conversations with Robin on the phone when he would describe his latest adventures, and quiz me for details of routes he aspired to do. I was intrigued that he wanted to repeat some of my climbs, but more importantly, I was struck by his infectious enthusiasm, boundless energy and plain love for the sport.

Rest in peace Robin – you will be sadly missed.

(Thanks to Andew Fraser, Dave McGimpsey and Scott Muir for their help in compiling this tribute).

Simon Richardson is a passionate Scottish winter climber
View all posts by Simon Richardson →
This entry was posted in Commentary and tagged Robin McAllister. Bookmark the permalink.