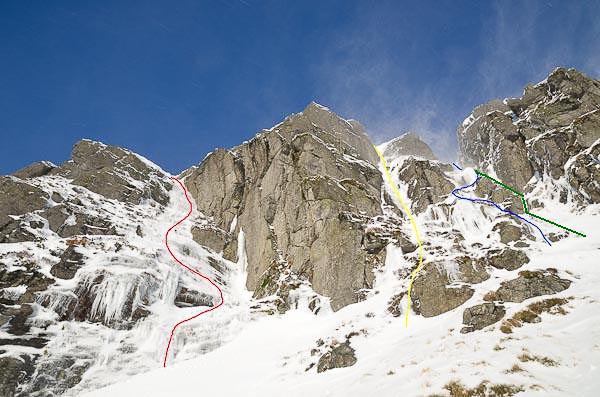 On Friday January 24, Ian McIntosh, Sharon Wright and Martin (Wilf) Holland decided to visit North Craig in Glen Prosen. “We were looking for somewhere East and low to avoid the worst of the weather and preferably with a southerly aspect,” Wilf explained. “None of us had been there before and I was gambling that the bouncing freezing levels had built some ice on the crag. Also, forecasts differed quite widely on freezing level with some saying freezing above 500m all day and others saying the freezing level would rise to above the summits in the afternoon.

We approached from Glen Doll. There was more snow around than I’d expected and less ice than I’d hoped for when we got to the crag. The steeper lines of White Plains Drifter and Whitewash weren’t in, but we did climb the line of White Sun of The Desert. The ice was thin and a delicate approach was required. However, I think the ice may have been more solid than on the first ascent as we were able to take a more direct line up the steep section by an icy corner and groove. It’s essentially the same line and grade and I think the route taken will vary with conditions.

With the freezing level rising we opted for a quick second route, which I’d guess is new. It was mostly Grade I ground, but had a good finish up an icy corner. Unforgiven (II) climbs a series of ramps to finish up a corner-groove defining the left side of a pinnacle-like feature can be seen 20m right of White Sun of the Desert at the top of the crag.”