Posted on February 2, 2014 by Simon Richardson 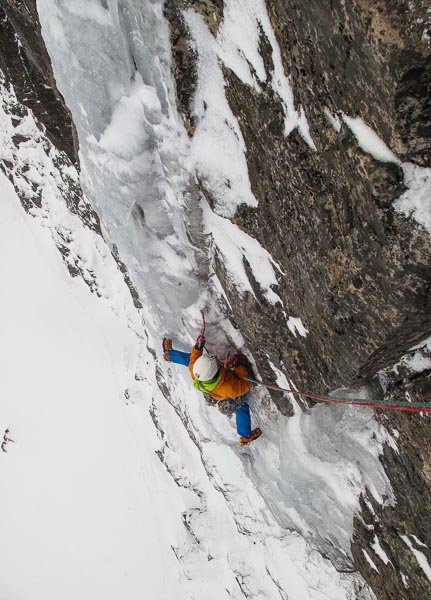 Guy Robertson following the vertical ice section on the bold second pitch of One Step Beyond (IX,9) on Beinn Eighe during the first ascent. The combination of steep technical mixed with thin vertical ice, makes this route one of the most challenging winter climbs in Scotland. (Photo Pete Macpherson)

Pete Macpherson and Guy Robertson made a highly significant addition to Beinn Eighe’s Far East Wall on January 29. One Step Beyond (IX,9) takes the line left of King of the Swingers, and is based on an unusual hanging ice smear that oozes from a seep half way up the wall.

“We’ve never seen anything like this anywhere else in Scotland,” Pete told me. “I think it’s quite unique. We’ve been to Far East Wall numerous times over the years but have never seen ice form so abundantly around this area before. We spotted the ice just before New Year when we had to make a hasty retreat off another line due to the onset of bad weather.

Conditions and weather were great last Wednesday, so we thought we’d have a look. To be honest I had reservations as to whether it would go, and after succeeding on only three routes this season with three failures due to poor weather, I was keen for success. Guy headed up the first pitch that starts below the big corner of King of the Swingers and belayed below the impending grooved arête to the right of the ice feature. Gaining the niche below the groove on pitch two involved some intricate moves, but when I was standing below it I was taken aback by the steepness of the groove above.

The groove was extremely strenuous tech 9 with absolutely no rest in sight, so I just kept climbing until I pulled round onto the ice into a wee icy niche, pumped out of my mind and ‘one step beyond’. I was way above my last gear (a small peg only half in), so I stood perched on the ice for an hour and half, scared out of my wits, as there was no more gear. Guy reassured me that there was nothing below me if I fell off – nice one, cheers for that Mr Robertson! Eventually I plucked up the courage to climb up to a bomber hanging belay at the top of the ice.

A thin crack system sprouts from the top of the ice. It looked utterly desperate, but appeared to be well protected by small nuts. Guy headed up the crack (solid tech 9), but unfortunately dropped our small wires at the start of the pitch. Gutted but not deterred, Guy pulled out a cracker of a lead, especially so when one of the cracks petered out over a bulge forcing him instinctively out onto the arête.

The next pitch is common to King of the Swingers and is solid VII,7, but I really struggled with it as I was so wrecked and it was getting dark. I stopped about two metres from the top below a steep tech 6 corner as both my arms kept cramping up. Guy nailed the last corner on failing arms and that was that. We could hardly untie from the ropes we were so exhausted.

Climbing One Step Beyond on sight is the stuff of dreams for me. The route is definitely my hardest on sight to date, and we thought it top end IX,9. It most definitely deserves four stars. This morning, four days after our ascent, I received a text from Guy which says it all – ‘Still high as a kite, dude!’”