Posted on February 19, 2015 by Simon Richardson 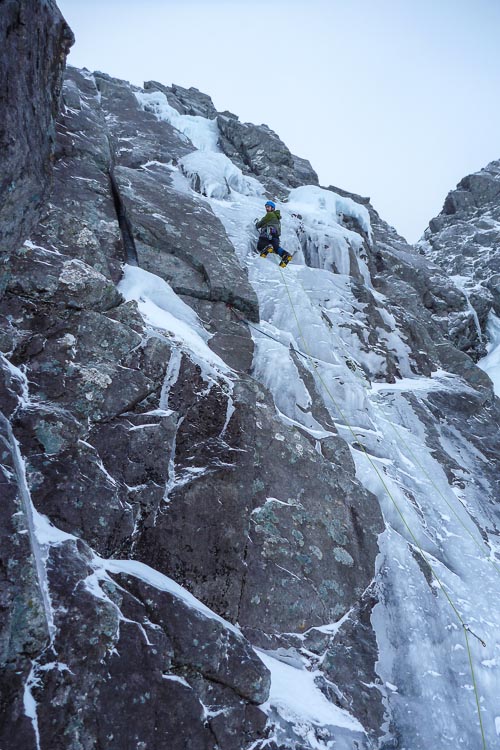 Michael Barnard climbing the line of Shear Fear (VI,5) on Ben Nevis. This steep two-pitch line on the west side of Tower Ridge provides a direct finish to Vanishing Gully. (Photo John MacLeod)

Michael Barnard and John MacLeod climbed a possible new ice route on Ben Nevis on February 14. “We climbed the obvious icefall overlooking the easier upper gully of 1934 Route, which makes a good finale to Vanishing Gully,” Michael told me. “I guess it could have been done before, but I can’t find any record. We called it Shear Fear and graded it VI,5. It’s often thin, and would be at least a grade easier with thicker ice.”

As Michael says, this is a very obvious feature (when formed) and it makes a natural finish to Vanishing Gully. Michael is absolutely correct that there is no published record of a route hereabouts, but I seem to recall a description in the CIC Hut Book of an ascent by (I think) an Italian party.

I’ll have a look at the hut book again when I’m next in the CIC, but in the meantime, if anybody knows of an ascent of this excellent-looking line, the please get in touch or leave a comment.