Posted on February 18, 2015 by Simon Richardson 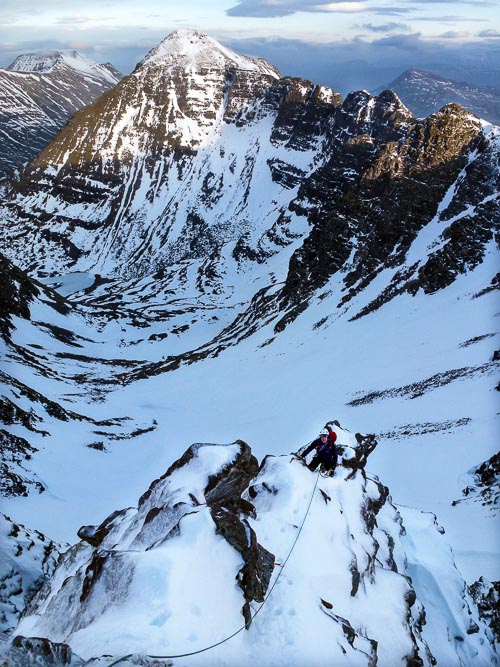 Steve Perry finishing up the ridge crest after the first ascent of Batman (VI,7) on the Northern Pinnacles face of Mullach nan Rathain on Liathach. The main summit of Liathach (Spidean a’Choire Leith) is behind. (Photo Andy Nisbet)

“Ice conditions have been great,” writes Andy Nisbet. “But the long mild spell in the North-West went on and on. Finally a colder day was forecast for February 13, but with rain and gales. A couple of days ago the forecast changed slightly and the low pressure was due to track further south, with the wind switching into the south-east. It took some faith and ignoring cautious mountain forecasts to realise that the north-west was actually going to have good weather. But would there be any ice left?

Driving into Torridon with Steve Perry, you would have thought not. There were some incomplete streaks on the Pyramid [on the south side of Liathach] but otherwise just patches. What a change from snow down to the road and wading up just eight days ago. Still, we’d driven over so might as well go as high as possible and at least see if the turf was still frozen; it was a lovely day after all. It’s lucky we even took climbing gear. The first sign of hope was when we had to put crampons on at about 850m, but then we reached the ridge and looked across at the Northern Pinnacles face of Mullach nan Rathain, and wow!

Every ledge was white with the tell-tale grey fringe of ice at its base. Every groove was filled with ice; it had obviously been the right altitude for thaw and freeze. While the rest of the corrie was bare apart from a few ice streaks, this face just looked as good as you can get. We descended into the corrie on neve and headed for the right face of a ridge called Holy Ghost. I climbed Holy Ghost with clients in 1996, but although the finish was great, I was aware that the start was avoiding the main difficulties. Now it was time to bite the bullet.

We geared up in a big wind scoop at the base and I set off up the supposedly easy first pitch. I was soon surprised by a tricky move but there was enough momentum to keep going. It probably would have been sensible to belay on a terrace but I kept going through a big turn right and climbed a shallow chimney to a ledge above Trinity Gully Right-Hand, which looked in great nick apart from a substantial chockstone which was iced but looked about Tech 5. It must need a big build-up to be Grade III,3.

Steve joined me below a wide crack with a smear of ice down its right wall. We didn’t have the sharpest gear (again) but I don’t mind thin ice (as long as it’s not too steep), so I kept the lead up excellent quality ice until the groove above turned very steep. With the advantage of having studied photos, I knew to move right and pull up an awkward wall to reach a very unlikely position on a ledge with overhangs above and below. The rock on this ledge looked awful, but with everything frozen hard, my three belay points felt adequate.

It was Steve’s turn to pull over a bulge on to an inset ledge and gain a reassuring crack we could see from below. When I first arrived at the stance, the next step right looked wild. But after I’d been there for a while, I became convinced that it was all in balance. It was somewhere in between of course, but it took Steve a while to convince himself that it could work. A peg runner of middling quality did help a lot but the ice placements were all to the right and footholds all to the left (there being mid air for the feet to the right). A final commitment looked hopeful but an axe popped out of the thin ice and he tested the peg. It rotated in the crack but held (just I presume). Some more wellying of the peg and time for another go. This time it worked and he was onto better ice overlaying turf, an ideal combination. The rope speeded up the best ice he’d ever climbed (but he wasn’t on Ben Nevis in April 2002) and he reached the crest of the ridge.

That left me a lovely pitch up the crest of the ridge, common to Holy Ghost, and the crest of the Northern Pinnacle ridge above its difficulties. We strolled up to Mullach nan Rathain for food and brilliant views. It was just one of those special days. Grading was hard, and with sharp tools VI,6 might have been right. But conditions were a bit special and less ice would have made it technically harder probably with better gear. So we settled for VI,7 and the name Batman, which I seem to remember is why the ridge was called Holy Smoke.”