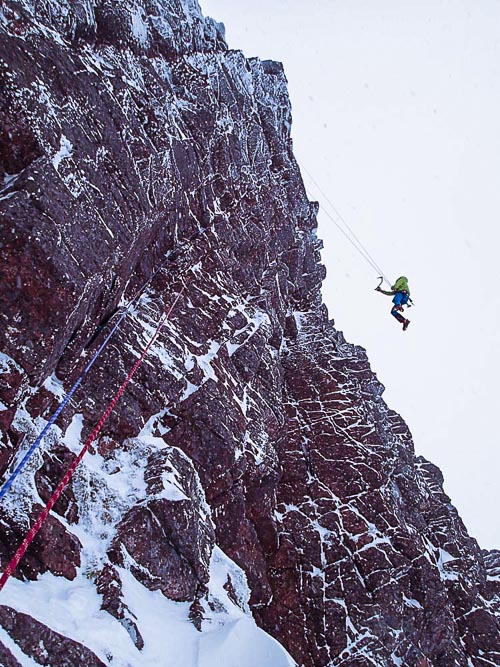 Greg Boswell just after his spectacular his ten-metre fall from Banana Wall (XII,12) in Coire an Lochain in the Northern Corries. After lowering down for a rest, Boswell then led the route on his second attempt that day. The only other winter route graded XII in Scotland is Anubis on Ben Nevis that was climbed by Dave MacLeod in 2010. (Photo Masa Sakano)

Greg Boswell and Masa Sakano made climbing history on February 25 with the first ascent of Banana Wall. This continuously sustained route takes the overhanging wall between Fallout Corner and Bavarinthia in Coire an Lochain on Cairn Gorm.

The route was graded XII,12 and is only the second winter route in Scotland ever to be given a Grade XII rating.

“Banana Wall has literally been eating away at me since 2011 when Guy and I first spotted it,” Greg told me. “I’ve been in to try it twice previously but down climbed from about eight metres both times after being way too scared to push on due to the steepness and lack of obvious gear! I rapped the route on my second day in, to try it to see if it would be safe to continue upwards, but due to the route being so steep, I was hanging in space from the word go and got very little info or feedback of what was to come! I was obsessed with keeping as much of the adventure alive as possible so I’m glad the abseil didn’t give me any real beta, it just got me more psyched to try the route. There was absolutely no practicing of moves or testing placements as I was free hanging eight metres from the crag at times when I rapped down.

I went up with Masa Sakano as he agreed to belay me for the day and second me if I got it (which I didn’t think I would do on Wednesday). On my first go I failed high on the wall and took a ten-metre whipper into space when my axe ripped (pretty scary). I lowered off and had lunch and then got it on my second attempt of the day. Finishing the second (much easier) pitch in the dark and storm winds with one headtorch between us – what an amazing adventure!

The route is crazy steep and the protection is there if you can hang on long enough to place it! The headwall was a bit run out and I got pretty scared trying to get onto the belay ledge!

I’m going with the grade of XII,12 as it is super sustained, very steep and the gear is there if you’re fit! It is by far the most sustained thing I’ve done in Scotland, and there are three roofs to contend with as you make your way up the wall.”

Greg has been on fire this season, leading the crux sections of his magnificent hat trick of new routes with Guy Robertson. These were ground breaking in themselves, but Banana Wall raises the bar yet higher. Greg considers Banana Wall to be M11, which makes it one of the most difficult technical mixed routes ever led by placing the gear on the lead.