Posted on February 2, 2011 by Simon Richardson 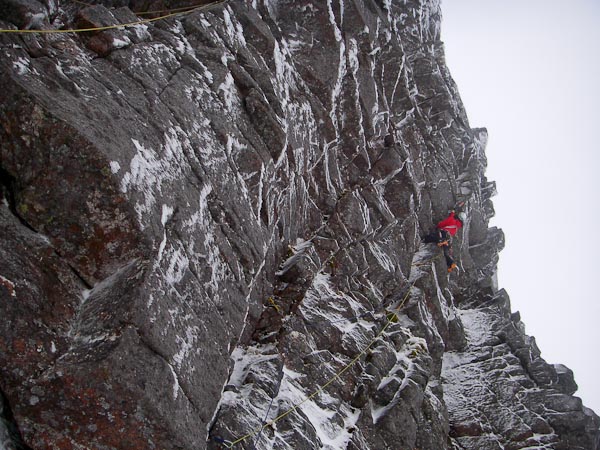 German climbing star Ines Papert powering up the first pitch of Bavarinthia in Coire an Lochain, Northern Corries. This new IX,9, climbed with Austrian Charly Fritzer, is one of the hardest new routes ever climbed in Scotland by an overseas team. (Photo Simon Yearsley)

Ines Papert and Charly Fritzer have continued their impressive run of routes. After their first ascent of Triple X (VIII,8) on Ben Nevis on January 28 with Dave Macleod, they headed back east. After a rest day they visited Coire an Lochain on Sunday January 30 where they both led the first pitch of Happy Tyroleans (both abbing down from the stance at the top of pitch 1), before Charly cruised Demon Direct. Ines then led the second pitch (which is shared with Happy Tyroleans), to complete the double tick. They reckoned both routes to be IX,9, but with Happy Tyroleans a little easier to protect as it has some in-situ gear. Interestingly, they both felt that Greg Boswell’s route, To Those Who Wait had, to quote Ines:  “…much harder moves, but better placements.”

The next day (January 31), Ines and Charly headed back into Coire an Lochain, with Neil Silver and Simon Yearsley, in the face of a poor forecast of strong winds and rising freezing levels. Simon takes up the story:

“We found a bit of shelter under No.4 Buttress, and whilst Neil and I did Fallout Corner, Ines and Charly quickly dispatched Savage Slit before spotting a new line on the awesomely steep blocky wall between Fallout Corner and War and Peace. It all got a bit exciting in the coire that afternoon… Ines powering her way up the steep unclimbed wall with precarious moves, hard to place gear, feet skitting off, one axe placement ripping, buffeting wind, Charly screaming ‘Gei Lo!’ in encouragement – and then to cap it all, Neil took an impressive 12-metre whipper from the top groove of Fallout Corner! I really didn’t think my nerves could take much more, and I was only belaying! The two-pitch route, Bavarinthia, weighs in at IX,9, and whilst Charly’s second pitch is easier [possibly pitch 2 of War and Peace], it’s a great looking line up an impressively steep wall.”

Bavarinthia (so named because Ines comes from Bavaria, and Charly from Corinthia) is an almost unique event in Scottish winter climbing. Very few overseas teams have succeeded in climbing new winter routes in the Scottish mountains – two notable exceptions are Raven’s Gully Direct Finish (Chouinard/Tompkins – 1970) and Happy Tyroleans (Schranz/Zak/Netzer –2001). There have been some very impressive ascents by overseas climbers such as Prezelj, Isaac, Cordes, Sourzac, House etc in recent years, but these have taken place in partnership with British climbers (and typically on International Meets). Charly and Ines have certainly been well briefed on their visit, and benefited from superb conditions, but they have also maintained a degree of independence and fully embraced the style and spirit of Scottish climbing.

Bravo, Ines and Charly – your visit has been an inspiration to us all!