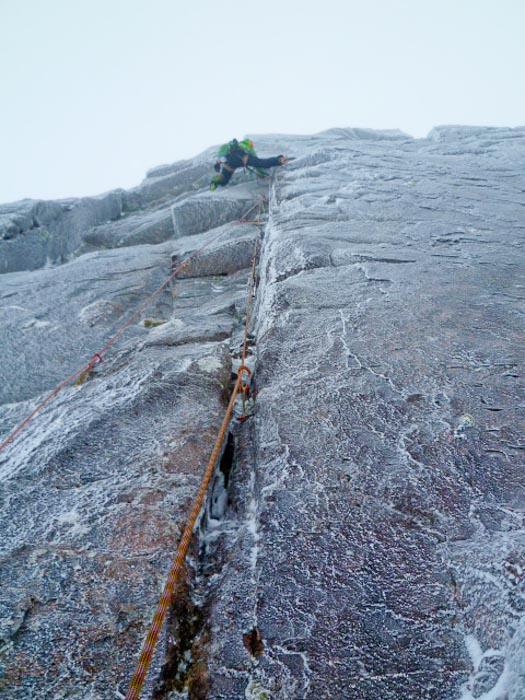 Greg Boswell making the first on sight ascent of Happy Tyroleans (IX,10) on No.3 Buttress in Coire an Lochain in the Northern Corries. (Photo Greg Boswell Collection)

Nineteen-year Greg Boswell is on a roll. Brimming with confidence after a superb recent run of routes, Greg visited Coire an Lochain on Wednesday January 19 and made the first on sight ascent of Happy Tyroleans, the impending corner-line to the right of The Demon on No.3 Buttress, with Mike Tweedley.

“It was an awesome route, one of the steepest I’ve climbed in Scotland,” Greg told me. “Initially I thought the difficulties were going to be high on the crux pitch, but the whole pitch was super-sustained throughout. The last rock-over move onto the slab felt very out there and exposed. Mike did a superb effort to clear and climb the second pitch, which was buried under a thick layer of crusty snow-ice and verglas. All in all it was a good hard route and like most of the routes in Coire an Lochain, it didn’t disappoint!”

The history of Happy Tyroleans is a fascinating one, and central to the development of hard technical climbing in Scotland over the last decade. The route was first climbed by Austrians Florian Schranz, Heinz Zak and Egon Netzer during the 2001 International Meet at Glenmore Lodge.

Zak had heard that there was an unclimbed line in Coire an Lochain, and was pointed at a thin crack and groove-line on the impending front wall of No.3 Buttress to the right of The Vicar. The route had been tried by a couple of Scottish teams over previous winters, and there were a couple of nuts in place in the lower half of the first pitch. Schranz set off up the initial shallow corner, clipped the in-situ gear and continued upwards placing two pegs on the lead. Unfortunately, he had to take a rest on each peg after placing it, and by the time Zak and Netzer had followed the pitch it was getting late, so they abseiled off leaving the pegs in place. Two days later they returned, Schranz re-led the pitch without any falls or rests, and Zak made a clean on sight lead of the second pitch to reach the top. Uncertain of the workings of the Scottish grading system, the Austrians gave the route a modest grade of VII,9, but Happy Tyroleans was immediately recognised as one of the most difficult technical routes in the country.

The Austrians had pulled off an almost unique feat in Scottish winter climbing by adding a ground breaking new route whilst visiting from overseas. From a Scottish viewpoint, the perspective provided by these top continental climbers was invaluable. Firstly, by redpointing the route the Austrians had deviated from the traditional Scottish on sight and ground-up approach, but this had allowed them to push the technical envelope. Secondly, they were meticulous about their equipment. I went to a workshop by Schranz one evening that focused on how to sharpen your tools. Sharpening picks was anathema to many Scottish mixed climbers at the time as it makes them wear down faster, but Schranz was adamant that you have to do everything possible to stack the odds in your favour when climbing a hard route. The overriding impression was that the Austrian’s success on Happy Tyroleans was driven as much by careful preparation and focus as it was by superb technical skill and gymnastic ability.

The ascent of Happy Tyroleans acted as a catalyst for pushing Scottish technical winter standards forward. Three weeks later, some national pride was restored when Alan Mullin completed his long-standing project just to the left of Happy Tyroleans, which he called Demon Direct (IX,9). Dave MacLeod also attempted to repeat Happy Tyroleans during the 2001 season, and came very close to an on-sight flash when he fell from the very top of the first pitch. MacLeod made three more attempts to repeat the route that winter, but these failed low down on the first pitch due to thick ice in the crack that prevented Friend protection.

In early January the following year (2002), MacLeod visited the Coire an Lochain with Alan Mullin intent on laying his Happy Tyroleans ghost to rest with a clean ground-up ascent. Conditions were perfect with the cliff well hoared up and the cracks free of ice. Mullin attempted the route first, but handed over lead to MacLeod who then led both pitches. MacLeod stated afterwards that the route was harder than any other winter route he had climbed before and the grade felt like IX,10. “I’m happy to have done a ground-up ascent of a route which required redpoint tactics from some of Austria’s best mixed climbers”, he commented afterwards. “It just goes to show that Scottish routes, standards and ethics aren’t so far behind (if at all) or dated as some would like to think!”

Greg’s on sight is a significant event. Not only does it complete the Happy Tyroleans story, but is a clear demonstration of how winter standards have progressed over the last ten years.