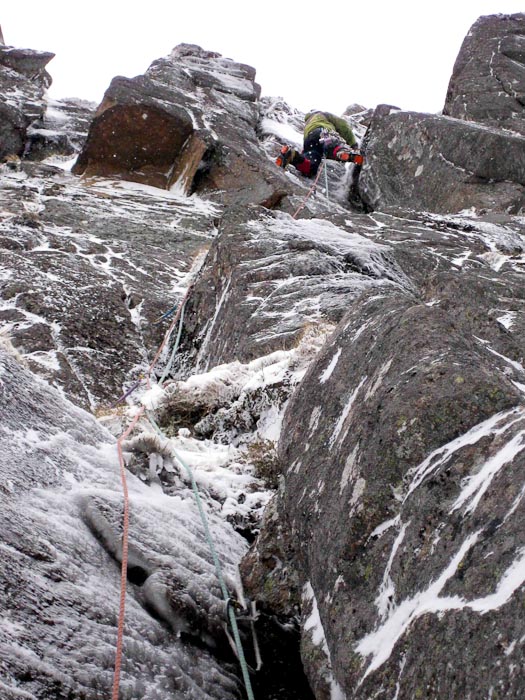 Andy Nisbet just after pulling through the roof on the first ascent of Arch Enemy (V,5) on Creagan Coire Cha-no on the eastern side of Cairngorm. In hard snow conditions the approach took less than one hour making it one of the most accessible cliffs in the Cairngorms massif. (Photo John Lyall)

I knew that Andy Nisbet would not be able to resist taking a look at Creagan Coire Cha-no, the little crag I’ve visited a few times this season on the eastern side of Cairngorm. After the thaw on Tuesday January 18, he went for a look with John Lyall. They weren’t sure of the best approach and initially descended in the wrong place.

“On our second attempt we found a short gully at the north end and soon had some crag to fit the picture,” Andy told me. “A long traverse under the crags picked out all the routes, so we knew where not to climb. John fancied a corner-line on the south face of the left ridge but I thought it looked hard, so left it to him. But the corner was full of chokestones so despite running out of slings, the route went well (Cutty Sark – IV,5).

The easiest descent was immediately on the south side of the central ridge (Anvil Buttress), somewhere which perhaps often is free of cornice, and that led us directly to another easier line, a gully above Anvil Corner. Approaching from above it looked easy, so we started further down next to Anvil Corner where thoughts of soloing it soon ended. A short V-groove proved tricky and we learned at the finish of Anvil Gully (IV,4) that this crag is steeper than it looks.

The same descent led us back under Anvil Buttress to a line we’d spotted earlier on the Arch Wall area. This time I thought it looked OK so set off casually to meet an awkward chokestone and bring back reality. This wall has a north aspect and was very wintery – all the rock was verglassed but there was neve on the ledges and the turf was great. A short step wasn’t so short, and then a short corner wasn’t so short and protection wasn’t so easy. In a precarious position at the corner base, I decided to place a peg in a crack in the left wall using my adze. This gave me little confidence for steep moves above, but since it’s still there, I clearly was wrong [about how good it was]. This left crack was full of blueberry but gave surprisingly solid placements in the very icy conditions. Over the top was good ice (thank goodness) leading to the steepness of snow you only get under a cornice. Some of this hadn’t fully frozen so a clutch of runners were placed on an isolated rock, beyond which the cornice stopped at a short arete.

The route (Arch Enemy, nothing to do with any competition of course) was hard to grade with me thinking it had felt a bit intimidating, but John finding little problem seconding it. So he persuaded me down to V,5 with a very logical argument. All these routes were one pitch, a bit shorter than we’d expected, but there was a good build-up at the base and the shorter lines had maybe been left [by Simon and friends].”