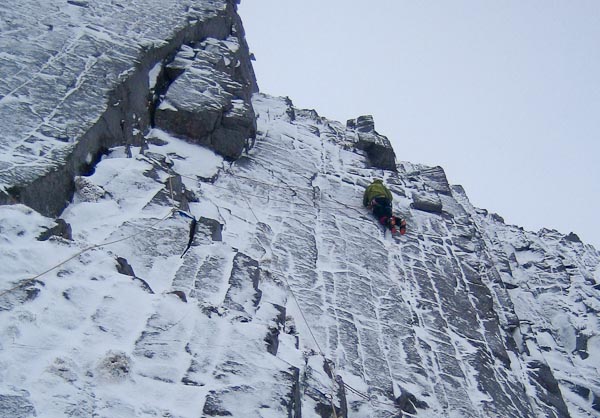 Andy Nisbet balancing up the crux inset slab on the first ascent of Kukri (V,6) on Creagan a’Choire Etchachan. The name fits in with the Etchachan ‘dagger’ route theme - a kukri is a Nepalese/North Indian curved knife. (Photo Helen Rennard)

On Wednesday January 19, Andy Nisbet and Helen Rennard visited Creagan a’Choire Etchachan in the Central Cairngorms. They climbed Kukri (V,6), a good mixed route based on the grassy fault and inset slab which bounds the right side of the arete of Delicatessen.

“With walking conditions after the thaw so good,” Andy told me, “it seemed a good chance to climb an obvious line on Creagan a’ Choire Etchachan which I’ve been eyeing up for years but never fancied the walk. We made it in three and a half hours which shows I’m slowing up despite the slipstream from Helen. A little fresh snow overnight made climbing conditions even better. A couple of thin moves on the slab might just have made technical 7 but V,6 is equally possible. A huge top chokestone was worrying me but Helen bridged up the steep icy groove below it and found a hidden route out left. We finished quickly and returned by a high route over the plateau practising navigation, not ideal since you could see Bennachie near Aberdeen quite clearly! The route started by walking over the ice on Loch Etchachan. Halfway across Helen asked me if I’d ever fallen through ice into a loch. I said no, because you can only do it once as you die. She noticeably speeded up!”