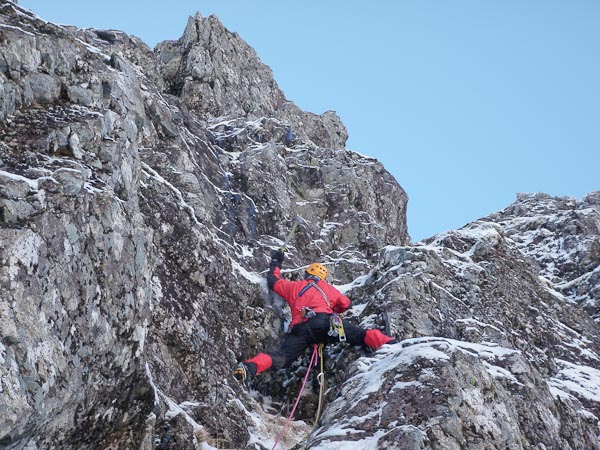 Simon Yearsley on the second pitch of The Promise (III), the first route to be added to the Sron na Lairig Summit Buttress in Glen Coe. This 100m-high crag is now home to three mixed routes. (Photo Dan Peach)

When Simon Yearsley and Malcolm Bass climbed the classic ridge route of Sron na Lairig on the south east ridge of Stob Coire Sgreamhach last December (see Major New Ice Venue in Glen Coe), they also spotted a potential new crag on Sron na Lairig itself. The SMC Glen Coe guidebook mentions ‘an easy grade I gully which leads up to join the main route’ on the summit buttress to the right of the ridge, but Malcolm and Simon were attracted by the short but steep buttress immediately right of the gully. The base of this summit buttress is at 900m, faces due north, and the steep central wall provides an obvious challenge, with other interesting lines to each side.

Simon returned on 22 December with Dan Peach, and they headed up to the ‘Sron na Lairig Summit Buttress’. They climbed The Promise, a 110m-long Grade III which takes a pleasant line up the left edge of the main summit buttress, before moving right into a pleasant hidden and twisting gully line to the top of the buttress. Simon, Malcolm and Dan then focused on developing the ice routes of Eilde Canyon, but the Sron na Lairig Summit Buttress was proving too much of a draw for Malcolm and Simon’s more usual mixed climbing tastes.

On 8 January they headed past the Eilde Canyon, and higher up into the Eilde Coire with Paul Figg and Neil Silver. Both teams were successful, with Malcolm and Paul climbing the most obvious weakness in the steep central wall – a fine grey pillar which petered out into a steeper barrier before the angle relented a little before rearing up again at the very top. The Grey Pillar (VI,7) gave a superb, if short,  two pitch route, probably deserving of two stars, and finishing via a steep corner crack. Simon and Neil found another fine line starting right of the steep central section via an awkward chimney, before heading back left on the main buttress to a conspicuous slot on the skyline. The Slot (V,6) is another excellent route which pulls through the eponymous final obstacle to belay on the summit on the same large block as The Grey Pillar, making for  a very sociable finish as one by one the climbers arrived on the summit gabbling  excitedly about their routes and taking in the glorious prospect down Loch Etive. Thin turf was a feature of both routes, and neither was particularly easy to protect.

“The ‘Sron na Lairig Summit Buttress’ is a fine wee crag which is reminiscent of Lost Valley Minor Buttress,” Simon told me. “With a cliff base of 900m and facing due north it should be in condition pretty frequently with a trio of fine routes and more still to do!”