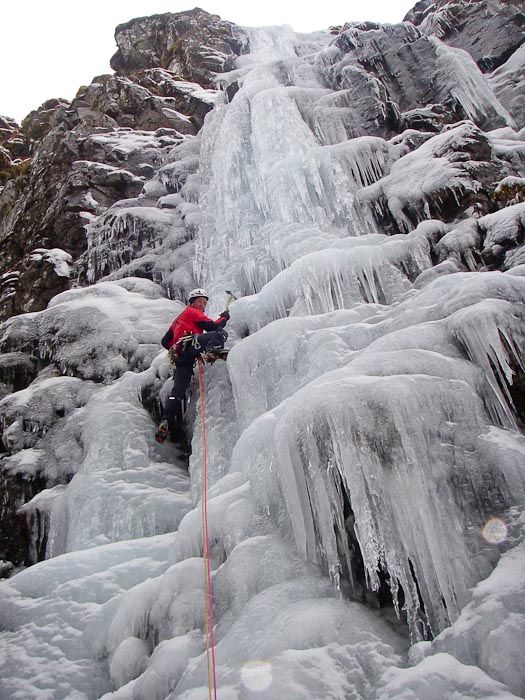 Malcolm Bass on the first ascent of the beautiful Zapatista (V,5). This is one of ten new routes added this season to the new Glen Coe ice venue Eilde Canyon discovered by Simon Yearsley and Malcolm Bass. (Photo Simon Yearsley)

Simon Yearsley and Malcolm Bass, along with a variety of friends, have been busy exploring the beautiful Coire Eilde in Glencoe.  Most climbers who travel up the Lairig Eilde are aiming for the classic ridge of Sron na Lairig on the south east ridge of Stob Coire Sgreamhach.  Malcolm and Simon wandered slowly up this fine ridge on December 12, after several beers and vodkas too many in the Clachaig the night before, to celebrate Malcolm and Paul Figg’s outstanding first ascent of the West Face of Vasuki Parbat in the Himalaya earlier this autumn.

Whilst descending back into Coire Eilde, they stumbled (almost literally!) into the Alt Coir Eilde, which tumbles into a steep-sided,  long canyon which is almost invisible until you are standing in the very edge.  The pair was amazed to see about a half a dozen superb icefalls dropping into the deep canyon.  The recent thaw was making some of them run with water, but there was no doubt that the early December freeze had created lots of ice in this superb and unusual feature, and it was ripe for exploration.  It was too late in the day to even find an easy way down into the canyon, and it also needed a wee bit more of a freeze.

Simon returned on December 22 with Dan Peach, and abseiled in from a convenient boulder.  The canyon was like no place either of them had ever been in Scotland…. the main canyon felt like a hidden world, and was about 250m-long, 10 to 15m wide with superb steep walls dripping with incredible icefalls, most of which were 30 to 40m long pure ice routes.  Rather than the half a dozen they had expected, as they walked up the canyon, the pair were amazed to find at least 16 compelling ice lines including an awesome feature of three vertical pillars of beautiful blue ice. They chose a line of steep ice above an obvious frozen pool towards the top of the canyon, and climbed Primero Pool (IV,4).

Simon returned again two days later on December 24, this time with Neil Silver and Simon Davidson.  Neil and Simon loved the venue, and likened it more to a Mexican desert canyon than a Glencoe ice venue… hence the Mexican vibe to the naming of the subsequent routes!  Christmas Eve gave two lines: the two tiered Andale Andale!  – a solid V,5 with a superb initial ice pillar and steep finishing section, and Jumble Left-Hand, again at V,5 up a large area of ice with at least three potential lines. Neil led the initial vertical and thinly iced wall of Jumble Left-Hand before moving to the centre of the icefall to finish.

Simon Davidson then returned on Boxing Day with Tom Broadbent and came away with three fine lines: the short but sweet El Mini at IV,4, which lies about 100m downstream of the main canyon, and Aye Carumba (V,5), the right-hand of the two obvious lines opposite the abseil point. They finished the day with Jumble Right-Hand, again at V,5.

Malcolm was keen to get amongst the action in what was now called ‘Eilde Canyon’, and made the regular long trip up from North Yorkshire on December 28. He led the beautiful ice formation, Zapatista (V,5), which gave possibly the most aesthetic route so far in the Canyon.  Simon was determined to have a go at one of the three vertical pillars, which had already been named ‘The Three Amigos’.  Setting off up Central Amigo, he was glad he’d borrowed Malcolm’s axes with their brand new picks, and the fantastic blue pillar gave the steepest line (so far!) in Eilde Canyon at V,6.  The pair finished a great day with Malcolm leading El Mixi (IV,5) – an excellent icy corner opposite Primero Pool with a fine mixed section at mid height which proved surprisingly tricky to protect.

The most recent visit to Eilde Canyon was on January 11 by Simon Davidson, this time accompanied by Neil Carnegie. The pair climbed Hongos (V,5) – the left-hand of what were now known as the ‘Grotto Icefalls’, which gave a fine pitch on chandeliered and mushroom featured ice.  They finished the day with a second ascent of Central Amigo, confirming its quality and steepness.

“Eilde Canyon is really like nothing else in Scotland,” Simon told me. “It’s very sheltered from wind on a wild day, at an altitude of 500m is only 100m lower that Beinn Udlaidh, which is probably a good indicator of good conditions in Eilde Canyon.  Ten of the most obvious ice lines have been done, but there are plenty more gems still to fall.  Wait for a good freeze, check if Beinn Udlaidh is ’in’, put your sombrero on, adopt a faux Mexican bandit accent, and …… vamos muchachos!!!”

Simon has produced a mini topo guide to Eilde Canyon, which can be download free from www.bigtreecampervans.com, where there are also a whole host of great photos.