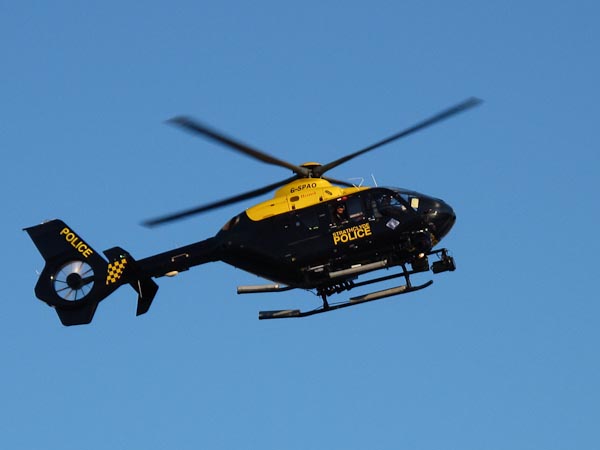 The Strathclyde Police helicopter hovering by The Brack with Captain Dave Traill at the controls. (Photo Pete Macpherson)

I received an interesting email from PC Kevin Brown from Strathclyde Police the other day.

“We were put on to your blog by a climbing Doctor from the EMRS (Emergency Medical Retrieval Service) and spotted the photograph of our aircraft, the Strathclyde Police helicopter at The Brack [see Exciting Times on Great Central Groove]. We were the crew on that day and part of the search. In the spirit of engaging with the climbing community can your blog handle video as we have the opposite view with footage of the two climbers midway in the climb?”

Kevin has now uploaded the video clip to Youtube. It’s 45 seconds worth – spot Pete Macpherson taking a quick snap of the helicopter with his G10 whilst belaying and Pete Benson powering his way up their new VII,9 finish to Great Central Groove!

“I take it the climbers are happy for this to go up as it does show their expertise!” Kevin stated. “The only things I can add about the call was that possible flares and light flashes had been seen by a passing motorist and climbers were possibly in distress, so we were actioned to search the Brack. We searched the whole hillside until the Strathclyde Police MRT team advised us that climbers may be found in the Gully called the Elephant so we searched there. At the same time the climbers were able to use their mobile to tell the Police all was well. The crew was PC Kevin Brown, PC Tony Collins and the pilot was Captain Dave Traill. A good exercise for us and the MRT and a very good casual snap taken by the belayer!”

Simon Richardson is a passionate Scottish winter climber
View all posts by Simon Richardson →
This entry was posted in New Routes and tagged Pete Benson, Pete MacPherson, The Brack. Bookmark the permalink.

3 Responses to The Helicopter View