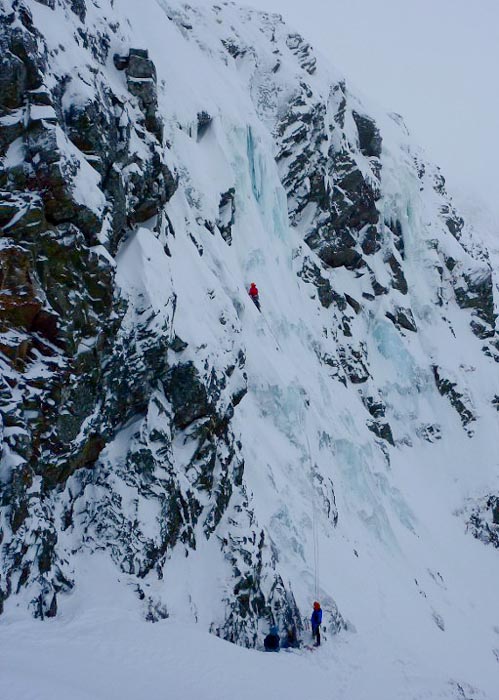 Last weekend (January 9), Paul and Rachel Mather together with Nick Bailey made the first ascent of Kandy Bar (V,5) in Coire Kander, which is tucked away on the north side of Cairn  an ‘Tuirc above Glen Callater in the Southern Cairngorms.

Kandy Bar takes the icefall to the right of Tuircish Delight which is situated on the right about halfway up Y-Gully.  “The ice unfortunately was very poor with about 6″ of sugary and untrustworthy ice over the top, ” Paul told me. “Which coupled with strong spindrifty winds made it an exciting ascent (for me anyway). We also climbed Tuircish Delight on better ice which is a good route worthy of its star, though a bit tough for the grade. The old III/IV grade would be most appropriate, but I think on balance it is closer to IV,4 than III!”

Paul wondered whether the route had been climbed before, but since I wrote up this coire for the Cairngorms guide and have no record of an ascent, I’m assuming it’s new. I did visit the coire in February 2001 however and was surprised to come across a party of three from Blairgowrie. They climbed some steep ice on the right side of the coire and I expected to see their climb reported in the SMC Journal, but it never appeared. I suspect several parties have climbed in Coire Kander and left their routes unrecorded over the years, so if you know of any such ascents, please leave a comment or drop me an email.

Postscript 22nd January 2010: It looks like Kandy Bar may have had a previous ascent. I received the following email from Joe Nunn on Thursday – “I seem a bit mean claiming the first on this route, but we (myself and Pete Eccott) climbed it on January 2 of this year! It was a real cracker in great condition and covered in little ice palm trees. It looks like from their pic that they did a left to right diagonal line whereas we started from the right (maybe 20m) and went straight up. Length was 50m from bottom of ice to snow belay above. And it was roughly V,5 I guess – similar to first pitch of Last Post or Hadrian’s Wall.”

One Response to Kander Ice