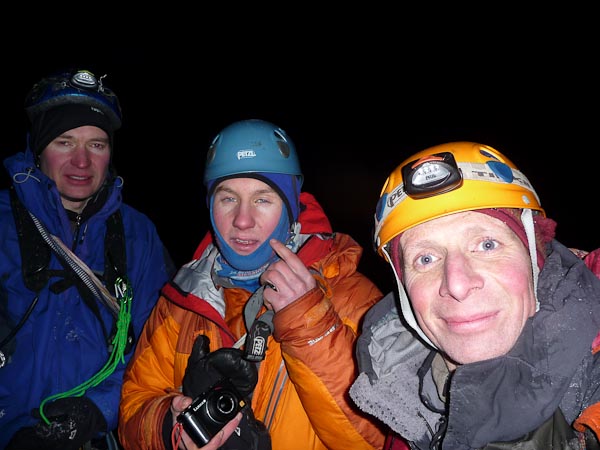 The price of success. The strain and exhaustion hide the elation in the faces of Gordon Lennox, Tony Stone and Iain Small just after completing the first winter ascent of Culloden (IX,9) on Creag an Dubh Loch. Culloden was one of the first Scottish IXs ever to be on sighted. (Photo Iain Small Collection)

We are living in remarkable times. As we exit the first big thaw of the winter it is a good opportunity to reflect on what has been a truly extraordinary season so far. The undoubted highlights have been the first ascents of Mammoth (IX,9), Satyr (IX,9), The Wailing Wall (IX,9), Culloden (IX,9), To Those Who Wait (IX,9) and Crazy Sorrow (IX,10). Throw in the second ascents of The God Delusion (IX,9) and The Cathedral (X,11) and an early repeat of The Duel (IX,9) and we have just witnessed the most remarkable period of high standard winter climbing ever to take place in Scotland.

And not only has the technical standard been high, but the style of many of these first ascents has been impeccable. Culloden, To Those Who Wait and Crazy Sorrow were all climbed on sight – previously the only Scottish Grade IX to receive an on sight first ascent was Defenders of the Faith (IX,9) by Dave MacLeod and Fiona Murray in March 2006.

It is interesting to speculate on the reasons for this massive run of success. The weather and consistent cold conditions have clearly paid a part. As Iain Small told me in late December after the first winter ascent of Culloden, the weather was so perfect and stable that it completely removed that variable from their ascent, allowing the trio to focus completely on the technical challenges of the climbing.

Another important aspect is Scottish winter climbing has been on a roll for several years now. Last season was the best ever but it has already been eclipsed. Undoubtedly the confidence produced by a string of successful ascents expands the horizons and allows the technical envelope to be pushed. The cooperative friendliness of the current generation, in contrast to the cut-throat competitiveness of the 1970s and 80s, has brought many talented climbers into the scene. It is particularly refreshing to see the young talents of Greg Boswell, Murdo Jamieson, Will Sim and Francis Blunt rising to the fore and contributing to some outstanding ascents.

New technology has helped too. Scottish winter climbers have fully embraced the advantages of leashless tools and any crack-line now appears to be an opportunity regardless of its summer grade. Petzl Dart monopoints are the universal crampon of choice and they are a huge improvement on anything that has gone before.

It can be difficult to recognise key historical events sometimes, as they can creep up on you. To my mind we are living through a period as significant to the evolution of the sport as the front point revolution in the 1970s and the recent crop of new grade IXs is equivalent to the famous Smith-Marshall week on Ben Nevis in 1960. Enjoy and relish history in the making. We are truly living in remarkable times.