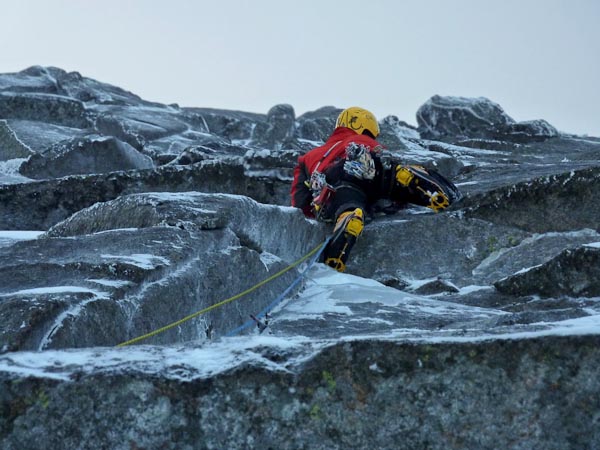 Big news from a busy weekend was the first winter ascent of Crazy Sorrow on Lochnagar on Sunday January 9 by Guy Robertson and Pete Benson. This summer E4 6a, which takes the roof and crack-line to the right of Mort on the Tough-Brown Face, was first climbed by Dougie Dinwoodie and Colin MacLean in July 1982. It is rarely climbed in summer, but has the reputation for being a good route with a fierce and well protected crux.

The winter history of Crazy Sorrow is rather intriguing. In November 2002 there was an extraordinary event when Alan Mullin visited the Tough-Brown face with Steve Lynch and climbed the crux pitch, calling it Frozen Sorrow. Unfortunately, the ascent was far from straightforward as I described later in the History Section of the 2007 edition of the SMC Cairngorms guidebook:

“Their ascent created a storm of controversy with allegations that the route was pre-practised and climbed when out of condition. Although the abuse levelled at Mullin on the Internet was shameful and Mullin failed to answer allegations about pre-practise, the key issue was that they failed to complete the climb and abseiled off before joining another route or reaching easy ground. Frozen Sorrow is one of the hardest winter pitches ever climbed in Scotland, but since it leads nowhere and stops in the middle of a blank face, it has to be classified as an attempt rather than a successful ascent.”

So the stakes were high for Guy and Pete when they approached the Tough Brown Face early last Sunday morning. When Pete started up the first pitch the weather was wild, but as he belayed under the crux roof of the second pitch the wind relented and the skies cleared. “I had to give it everything to get over the roof,” Guy told me. “But the protection was good so I decided there was nothing to lose by giving it a go.” Once over the lip, Guy continued up the technical 8 ground above, but was rather surprised to find six pieces of in-situ gear.

“This fixed gear was pretty unusable and had clearly been there for several years, “Guy told me. “It detracted from the experience, and I was fortunate to find other runner placements that were just adequate. All the best placements were taken up by rotting wires and nuts that I just could not clip.”

The decision to classify the route as an attempt in the Cairngorms guide was correct, as Pete then had to lead another demanding technical 8 pitch to reach easy ground and the crest of Tough-Brown Ridge. The pair graded the route IX,10 and Guy said afterwards that the sequence around the roof was one of the most testing technical moves he has ever made.

The first winter ascent of Crazy Sorrow is a significant achievement and draws a line under the Frozen Sorrow saga, although climbing historians will be pondering the explanation for the in-situ gear for many years to come.