All Aboard the Elephant Train! 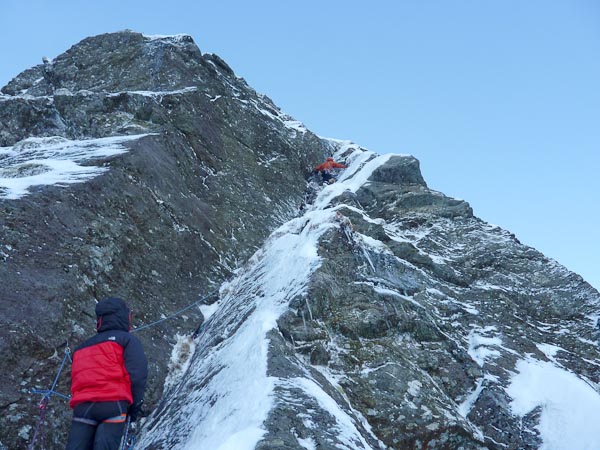 Donnie O'Sullivan (leading) and Pete Davies on the crux pitch of Elephant Train (V,6) on The Brack. This section is the same as the fifth pitch of the summer E2 Mainline and had previously been climbed in winter by the route Hogwart's Express (VI,7). (Photo Pete Davies Collection)

The following day (January 9) they returned and added Elephant Train (V,6). This interesting variation takes the first pitch of Elephant Gully and then follows a large horizontal ledge leftwards across the crag to gain a line of weakness which leads diagonally up and left to reach the top tapering groove of the summer E2 Mainline. They climbed the groove (crux) and then finished up the short sixth pitch of Mainline. These last two pitches coincide with Hogwart’s Express (VI,7 and first climbed by Andy Clarke and Frank Yeoman in January 2002), which starts up the right edge of the central wall to the right of Great Central Groove and Resolution.

“It was a devious expedition crossing the Brack’s upper tier,” Pete told me, “with commodious ledges at every belay!”