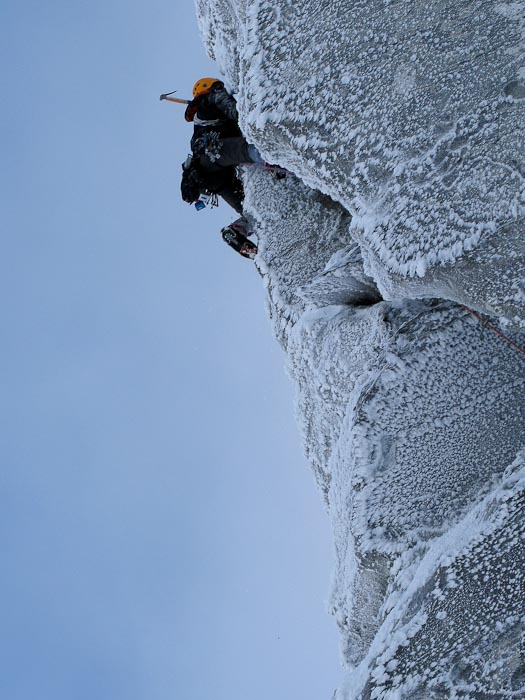 Iain Small pulling through the bulges on the first ascent of a new VII,7 on Beinn an Lochain, Arrochar. This steep crack-line cuts through the front face of the buttress containing Edge of Darkness. (Photo Simon Richardson)

Several years ago, my good friend Chris Cartwright suggested that there was a new route to do on the front face of the Edge of Darkness buttress on Beinn an Lochain in Arrochar. This attractive feature lies on the North Ridge of the mountain and is bypassed on the left when walking up the hill. Being in such a prominent position, it is rather surprising that it has held out for so long (although I suspect it was a well known objective amongst Southern Highlands aficionados), but to the best of my knowledge it was unclimbed.

Iain Small and I were looking for a suitable objective in the Souhern Highlands for Sunday January 9, and this seemed to fit the bill. I’ve climbed on most of the Arrochar hills but had never been on Beinn an Lochain before, so I was keen to visit a new venue. Iain on the other hand had climbed various routes on the mountain and was well aware of this potential new line.

The snow storm the night before left the approach up the North Ridge deep in new snow, and it was slow work approaching the crag in the teeth of a north-westerly gale. We were on the verge of turning tail, but the foot of the crag was sheltered, so we uncoiled the ropes and gave it a go. It was a long time since either of us had last battled with Arrochar mica schist, but Iain pulled out the stops and made a powerful lead of the first pitch, before I found circuitous way through the upper half of the buttress.

The climbing was so contorted, awkward and strenuous that afterwards Iain suggested that the route was upgradeable, but in the end we settled on VII,7 – a rather enigmatic grade that doesn’t give too much away!

6 Responses to Riding the Storm