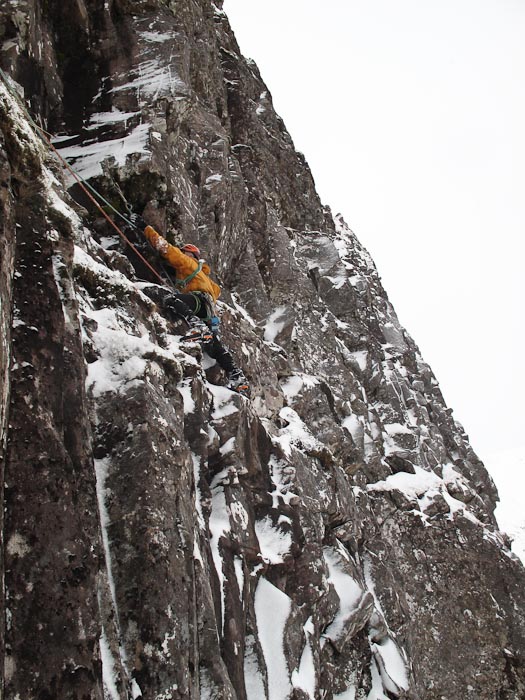 Martin Moran on the second ascent of The God Delusion (IX,9) on Beinn Bhan in Applecross. This touchstone route was first climbed by Guy Robertson and Pete Benson in December 2008 and is reckoned to be the most difficult winter undertaking in the Northern Highlands. (Photo Pete Macpherson)

Martin Moran and Pete Macpherson repeated The God Delusion (IX,9) on Beinn Bhan yesterday (December 8 ) in a 21-hour round trip. They used snow shoes for the approach and started climbing at 8am. They climbed the route in nine pitches and finished 14 hours later having negotiated the last three pitches in the dark.

“There was loads of snow and  perfect conditions,” Pete told me. “It is a magnificent, intense and insane route and definitely worth IX,9! My hat goes off to both Roberston and Benson for finding a way through such scary ground!”

Congratulations to Martin and Pete for a superb ascent. With first ascents of Apache, Omerta, Catriona, Satyr, Mammoth and now the second ascent of the hardest route in the North-West it has been a remarkable three weeks. Scottish winter climbing is humming more than ever it has before!