The Sting – Finally Repeated After 20 Years! 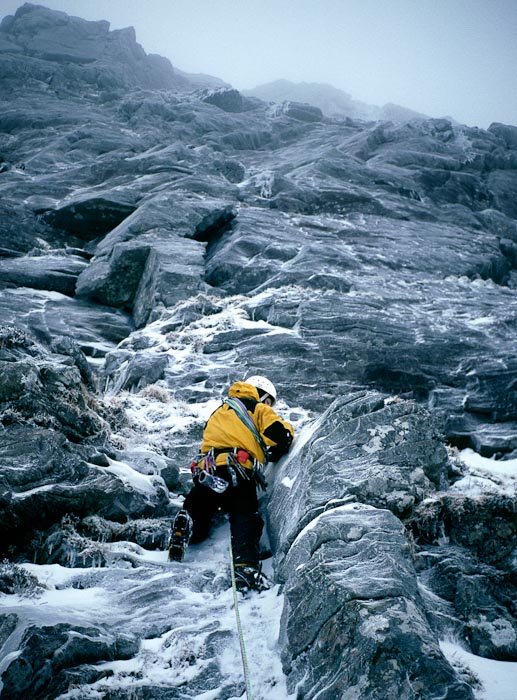 Chris Cartwright on the first ascent of Golgotha (VII,7), Creag an Socach, Ben Dorain in March 2000. The pronounced rib of the summer line Scorpion can be seen above and directly in line with this, and slanting up rightwards to the skyline, is the corner of Scorpion taken by The Sting. This corner has been described by Stuart McFarlane as the 'finest pitch in the Southern Highlands'. McFarlane started up the first pitch of Golgotha on his first attempt to repeat The Sting last month. (Archive Photo Simon Richardson)

Winter climbs are like buses. A route waits 20 years for a repeat, and then two come along together!

After failing to climb The Sting on Beinn an Socach on the Bridge of Orchy cliffs the previous weekend, Stuart McFarlane returned with Gary Houston and Sam Burns on Sunday December 5 and completed the route. This should have been the second ascent of this Graham Little-Kev Howett addition from 1991, but the trio were in for a surprise. Stuart takes up the story:

“I was slightly disappointed to find someone had been there before us, but there was no evidence of our abseil gear. This time Sam led ‘the finest pitch in the Southern Highlands’ with modern tools (Fushion 2’s), commenting that he’d found it quite insecure and harder than the grade suggests. Kids these days, climbing without an adze! On the way home, we stopped for chips at Tyndrum (best fish supper in Scotland), bumped into Susan Jensen and Iain Small. They had climbed The Sting on Saturday, also finding it ‘harder than V,6’. When asked did they find my abseils, Iain went out into his car and handed back my gear. What a nice couple! May I suggest, when the new Southern Highlands Guide goes to print, The Sting is graded VI,7.”

Postscript 13th December 2010: It looks like I was a far too hasty in declaring the ascents of The Sting last weekend as the second and third. Tim Neill emailed me yesterday to say that he climbed the route with Keith Ball last February. “We also did Deliverance on the same day which was excellent,” Tim explained. “It seemed the most natural and obvious way leading to the excellent ice groove described in Promised Land. Back to The Sting. We laughed afterwards as our ‘quick Grade V to finish the day’ turned into a race against the dwindling daylight. The name becoming obvious in retrospect. We assumed it to be a regularly climbed route as it was in the selective guide and also the second pitch seemed like it had lost crucial turf due to lots of ascents. A good value route!”

Tim is certainly right about earlier ascents because Helen Rennard told me today that she climbed the route with Rob Greenwood in January 2003.

So I’m intrigued now – so who did the make the second ascent of The Sting? Drop me an email, or add a comment, if you know of it being climbed before 2003. Also does anybody know of second ascents of Antichrist, The Enemy Within or Golgotha? I’m assuming that Defenders of the Faith, Dave MacLeod’s superb addition from 2006 has not been repeated, but I maybe I’m wrong about that too!

7 Responses to The Sting – Finally Repeated After 20 Years!