Posted on December 10, 2010 by Simon Richardson 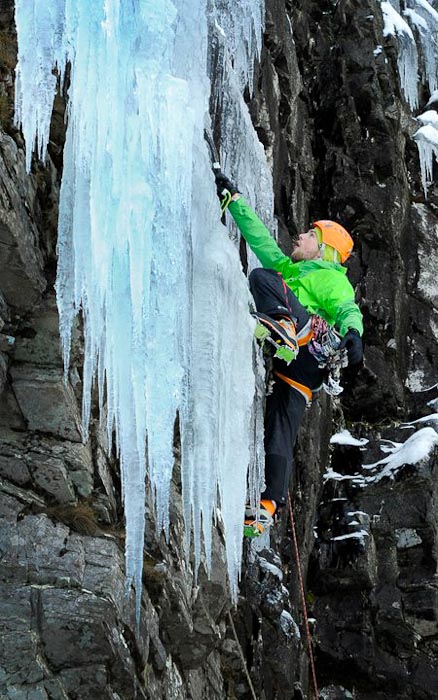 Greg Boswell pulling onto the hanging ice smear during the first ascent of The Crooked Smile on Beinn Udhlaidh. This VII,7 takes steep ice running down the steep wall to the left of The Smirk. (Photo Sean Bell)

On Wednesday (December 8), Greg Boswell and Neil Carnegie made a difficult new addition to Beinn Udhlaidh. The Crooked Smile (VII,7) takes steep mixed ground to the left of The Smirk to gain a hanging ice smear which leads up to a cave. The second pitch steps right out of the cave and climbs two steep ice steps to reach easier ground at the top of The Smirk.

Greg led the crucial first pitch which involved steep mixed climbing to gain the hanging smear. “I set off up the first steep mixed section and it soon became clear that there wasn’t much gear to be had,” Greg explained on his blog. “I reached an icy blob on a small ledge which I used to hang around on to find some gear before I committed to the crux moves onto the ice fan.The only kit I could find was a half hammered in Pecker, but it was pretty good (so I hoped). I got psyched and charged for the thin ice, which turned out to be pretty good and it didn’t take long to get established on the fat ice pillar, Ahhhhhhhhhhh…… thats better!!! Apart from the start of the second pitch which was a bit thin and teetery, the rest of the route was fairly straightforward but great fun. “